American Idiot doesn’t seem to quite know where it stands. Not quite Rock Opera, not quite Musical Theatre.

The cast was exceptional, with standouts being Whatshername (Phoebe Panaaretos) & Heather (Ashleigh Taylor). The last minute inclusion of Ben Bennet as lead worked. His character was well played and his guitar playing was very well done.

The interaction of the band onstage was a great feature. The musicians coming and going as needed and playing off in the wings when other things were happening onstage. The fact that all the leading men (and women, on the nights Adalita and Sarah McLeod are there) also played guitar really added to the inclusion of the music. You had to feel sorry for the drummer, stuck in his perspex box all night.

As an audience member that wasn’t overly familiar with Green Day’s catalogue, the storyline was hard to follow at times. The inclusion of more dialog or a stronger sense of storytelling would’ve really added a deeper dimension to the show.

The character of St Jimmy is being played by 3 different rock stars on different nights – Sarah McLeod, Adalita & Phil Jamieson. Jamieson was the one on opening night.

Stage setting and multimedia really added to the show. iOta’s interlude on the screens was great. The show didn’t have an interval, which is unheard of, especially being 1.5 hours long.

Overall it was an enjoyable, if slightly confusing, night out. It was interesting to talk to some regular theatre goers to get their reaction. They were a bit mystified about the whole thing. It’s hard to know where this show fits.

The show isn’t for everyone, but as long as you know what you’re in for you should have fun with it. 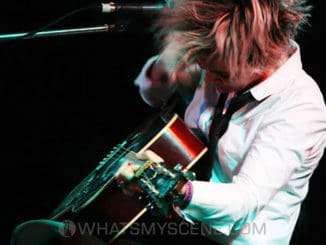 Right now it’s a room with no lights on. An unmade bed. A laptop with 9% battery and a mosquito that just refuses to die.
Dave Larkin, Dallas Crane
Cool venues with good beer on tap that don’t mind us getting loud and getting room grooving so hard you feel the floor shaking.
Papa G and The Starcats

Cool small bars with good food, good wine, good company
The Backsliders
Currently its the Yarra River Trail I’m walking along. Generally my scene would be Melbourne. Nothing feels or compares to home.
Simon McConnell, The Delta Riggs
If you’re a Max Chillington then you’re our scene.
Gunslingers

I love being on a little boat near home in South West Victoria with a fishing line in the water, the Sun coming up or going down. I also love walking the streets of Melbourne or Manhattan or many of the beautiful towns and villages of Ireland or anywhere. My partner and my family are central to it all. I also love being in the midst of a great music session, anywhere, anytime, being transported into the soul of the Universe.
Shane Howard
Hot, hot lovers
Luke Monks, Gay Paris

Well I’m still looking for my scene, and I think I might have found it. Between the pages of What’s My Scene Magazine.
Dave Faulkner, Hoodoo Gurus
Sitting in the sun, in a nice chair, with a good book.
James Reyne

I like to think that I belong to the head-strong Independent Music Scene – where we – musos and audience and everyone in between – all make gigs/tours, recordings, releases happen for ourselves and work our arses off to keep it going for the rest of our lives – all for the love of Music!
Florelie Escano
Melbourne. Nowhere else is as great as Melbourne.
Brat Farrar

When I’m not working in the studio or doing shows I’m at home with my partner and our baby so I guess they are my scene.
Way of the Eagle
I don’t wish to belong to any scene that would have me as a member (with thanks to Groucho Marx).
Bob Spencer, Raw Brit

Flanelette pyjama pants.
Timberwolf
My scene is a Punk-hardcore scene or an underground, minimal electronic scene, something grungy – where everyone is wearing black. That’s my vibe; don’t go out until 11 when all the other vampires come out and go home when the sun comes up at 7. Oh shit. Creatures of the night.
Greg Puciato, Killer Be Killed & Dillinger Escape Plan

My scene is driving fast cars and shooting guns.
Ace Frehley
Our scene is this big gorgeous wide world we live in all its majestic splendour!
Kim Salmon, The Darling Downs

Tunes, mates, and honesty. No dickhead policy!
Buddha In A Chocolate Box
Art is my scene. No labels, restrictions or judgement. I love art in all it’s varied glory.
The Last 5 Queers

Going to the river on sunny afternoons with the blow up dingys and resting your beers on lily pads.
The Frowning Clouds
Hiking a 14K foot mountain in Colorado
Cole Washburn