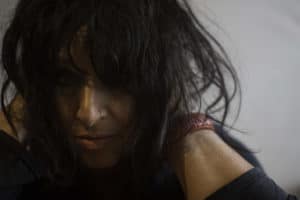 New album: just released on CD and Vinyl “Woman Got to Cry”

I’m proud of all the new work as I very much enjoy writing and performing my own songs but I particularly like the way “I Must Love You “ from the new album turned out.  Its exactly the feel I wanted and it has a beautiful, spacious, guitar solo by Sam Teskey.

Because we recorded the new album on Jimmy Barnes’ old analogue tape machine, now located in Sam Teskey’s Warrandyte Studio, it’s a very different process. In order to get that authentic feel it’s kind of counter productive to then edit it digitally. I enjoyed the challenge of recording the songs direct to tape, listening back and after one or two takes choosing the best and going with it. What you get is that raw immediate sound. We were all on board and in agreement as to what we wanted. It sounds live, warm and immediate.

Like a big chocolate mousse. Smooth, sweet, dark as night and memorable.

Lots of people inspire me past and present. I’ve listened to lots of black American music all my life. I like the classy lyrics of the past. I like Neil Young because I think he’s stayed true to his political beliefs and activism. His songs have strong themes and he still writes and performs and goes on marches and fights for what he believes in.

More performing further afield.  I’m organizing a tour up North. Then back to London to perform and promote the album there next year. And I have more songs to record. I love writing songs. It’s given me a new lease of life.

Hanging out with my friends around Fitzroy. Jamming at home with my partner who plays sax and walking my dog who is a real character. My kids. Cooking. Riding my bike.

Cutting her teeth on soul, blues and jazz – in particular with songs of the 30’s and 40’s by Billie Holiday and her contemporaries, Yolanda Ingley ll has been impressing audiences in the clubs and pubs of Melbourne and elsewhere – most notably London where she has travelled several times in the past decade to perform. This included a 4 week stint at the legendary West End Club “Jazz After Dark”- a favourite of Amy Winehouse.

In 2014, Yolanda began writing music, finally finding her own voice by drawing on her own life and experiences.   Working with seasoned musicians Yolanda emerged as a mature and sophisticated singer/songwriter capable of creating a rich fusion of styles referencing her “abiding love of southern soul, blues and jazz”. The songs also reflect a deep, witty and insightful take on love, life and loss.

Her songs range from the intimate and personal,  “Backroom of my Dreams” (written for her sister who she lost in 1983) to the social “The Bridge” (written after she heard of the London Bridge terrorist incident)  or the title track, “Woman Got to Cry” written as a response to Marley’s “No Woman, No Cry”. As Yolanda says ” it seems woman have got a lot to cry about at the moment. Indeed if women aren’t crying for the world, who is?”

2016 saw the independent release of This Dangerous Age which gained Yolanda a reputation on the Melbourne scene as a songwriter to watch alongside her already recognised vocal skills.

The album proved hugely popular at the iconic record store Basement Discs – whenever it was played in store, customers would come to the counter to enquire about it – so much so that it became one of their year’s bestsellers.

Yolanda is humble about the reaction to her original releases so far, but she has been surprised and delighted with the response to her song writing.  “My music is influenced by all the music I have always listened to and loved but it’s also very much my own voice … and the feedback I’ve been getting is incredibly exciting- I taught myself to play a little guitar only a few years ago then started writing songs so to be able to make this album with producer Sam Teskey is a real thrill”.

Yolanda’s music has to date been featured on Radio National’s The Music Show with Andrew Ford, ABC Melbourne’s Sundays with Libbi Gorr and The Friday Revue with Richelle Hunt and Brian Nankervis and has regularly receives a good amount of airplay on Melbourne community radio stations Triple R, PBS FM and 3CR.  With the release of Woman Got To Cry, here’s hoping more people get the opportunity to hear and enjoy the songs of Yolanda Ingley ll.