Tell us about your new single/ album/ tour?
Our new single/album/tour is this crazy thing we developed where we decided to do a single album tour for our new 8 track cd Gospel. We’re only going to tour it once, but we’re going to all the major places like Brazil and France so it should be pretty epic. The Melbourne album launch show is July 29 at The Workers Club. We’re also touring nationally with our mates Ceres and Sincerely Grizzly throughout July.


How would you describe your sound in food form and why?
Tinned spaghetti. Looks good on the packet, not so good inside. Unless you get Heinz which is just plain good. so I guess the band is all tin spags excluding Heinz. They take their tin spag pretty seriously… i think ultimately thats why they have been so successful in the tin biz… they respect the consumer and hence, the consumer respects them.

Which song resonates most strongly and why
Back Paddock Blues coz its about euthanasia stuff.

Any on the road anecdotes?
One time Simon ate a cheese sandwhich but the cheese was the bread and the bread was the cheese. Completely loco.


Where do you draw inspiration from?
Idiots mainly. Or friends or a story or an article or a movie.

What’s next for you?
I think I’m going to work on this assignment that I’ve been putting off. Oh actually no, next I’m have breakfast with dad coz he is going to Bali tomorrow and I need to give him his boogie board… plus he normally shouts brekky so its an opportunity not to be missed. You guys feel dat?

About the Pretty Littles 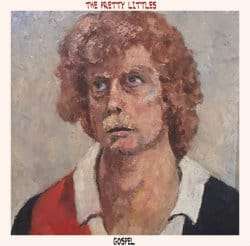 The Pretty Littles have developed monumentally in the last few years and there are splashes of that all throughout their newest offering, Gospel. Recorded intermittently over six months with Vasco Era producer Neil Gray, it’s a collection of music that hints at the love for early-to-mid-2000s rock that originally brought the Melbourne outfit’s members together. It also reveals a matured sense of songwriting and performance that is their own signature creation, undoubtedly the result of hours and hours sweating it out on stage for their own sell-out shows, as well as warming up the punters for the likes of The Vasco Era, The Mess Hall, The Cribs, The Smith Street Band and Bad//Dreems.
Lyrically , Gospel plays on a concept that moves somewhere between being a kid in control and being an adult, lost. It is about the transition from being self-centered to self-aware and back again. It’s about what actually means something and what does not. It moves somewhere between dumb shit punk, rock and roll and pop.
The Pretty Littles hope their CD finds a home in the cluttered glove box of your car amongst some suspect-looking napkins and a novelty lighter. That you put it on when you’re cleaning your house or getting ready to head out. They hope it induces the odd day dream when you’re on a crowded train on the way to work. They want you to put it on real fucking loud when you’re riding home quarter flash and half cut. Even if you just like the odd song or two, that would tickle their giblets in a big way.
Speaking of giblets, few things are likely to weird out your weekend better than their new video for their previously released track ‘Man Baby’. Full of blokes in ball gowns, ill-advised dancing lifts, and explosions of confetti, it’s the most weirdness packed into one shot since Birdman: Or (The Unexpected Virtue of Ignorance). Watch it in the player in the gallery at the top of the page.
Gospel is set for release June 9th, just before the band accompany rising Melbourne punks Ceres on a national tour that will see them bringing the warm and fuzzy feels to Australian audiences throughout winter.
They’ll then return home to officially launch Gospel at The Workers Club in Fitzroy on July 31st.
THE PRETTY LITTLES – ‘GOSPEL’
Out June 9
CERES & THE PRETTY LITTLES
With guests Sincerely Grizzy
Saturday June 27 – The Tote, Melbourne
Friday July 10 – Factory Floor, Sydney
Saturday July 11 – Crowbar, Brisbane
Friday July 17 – Crown & Anchor, Adelaide
Saturday July 25 – Old Bar, Melbourne
Friday July 31– The Workers Club, Melbourne *GOSPEL LAUNCH SHOW*
Tickets: http://theworkersclub.oztix.com.au/?eventId=52393
https://www.facebook.com/theprettylittles
https://twitter.com/oiprettylittles
https://instagram.com/theprettylittles/
About Mandy Hall 892 Articles
Mandy is a music photographer & writer. She runs Mandy Hall Media, which includes Photography, Social Media marketing, PR & Graphic Design for the music industry. She is also a web developer - she created and supports this website.
Website Facebook Twitter YouTube

Bringing in the 2017 AFL Grand Final weekend with boisterous acclaim will be none other than Aus rock warriors Dallas Crane joined by a very illustrious cast coming together at The Corner Hotel for The Great Rock’n Roll Pie Night! […]

Tell us about your new single/ album/ tour?   Belle: Our first single is called ‘Moving Time’ and has a super uplifting message to it – we all need a little reminder every now and then that this […]

Tegan Voltaire, The Voltaire Twins
If you’re a Max Chillington then you’re our scene.
Gunslingers
The Astor Theatre on chapel st. Old cinema with copious amounts of atmosphere playing classic films (Chaplin, Gene Kelly, Kubrick, etc) and me with a honeycomb choc top spilt on my Tshirt because that’s just how I roll.
Jude Perl, Comedian
I will continue the continuum, singing my Songline.
Kutcha Edwards
Our scene is in the city of Bath, a small city with a very big musical identity, we play the British festivals and I am also in the ’choirs scene’. We are also in other bands for fun, music all the way, roll on summer!
Su Hart, Baka Beyond
All the wandering. The bastards and the angels. The sound of the rain and the pains of the heart. The silence. All the houses and all the rooms. All the keys and phones.
Raised By Eagles
Melbourne. Nowhere else is as great as Melbourne.
Brat Farrar
I love being on a little boat near home in South West Victoria with a fishing line in the water, the Sun coming up or going down. I also love walking the streets of Melbourne or Manhattan or many of the beautiful towns and villages of Ireland or anywhere. My partner and my family are central to it all. I also love being in the midst of a great music session, anywhere, anytime, being transported into the soul of the Universe.
Shane Howard
I think my style is more just making cameos in everyone else’s scene.
Mojo Juju
Hiking a 14K foot mountain in Colorado
Cole Washburn
Our gigs have an air of danger and sex. Beautiful women are free to express themselves and are as dangerous as hell. Everybody can have a good time ’cos there’s a lot of love in the room and we just can’t help but stomp out that primeval swamp boogie ooze.
Chris Russell’s Chicken Walk