Tell us about your new single / album/ tour?

Our New single Coca Cola is our First single off the upcoming EP release WILD, on Nov 1st

Buttermilk Fried Chicken, ‘cause its just an old classic but all dolled up for the sale

The Game resonates, also Moonlight Queen I think, very common problems, i think everyone has had to deal with issues like these in there life, feeling like they’re lost in a game chasing someone that has other intentions, or motives and i also think that a lot of people have had someone come into there lives right when they think needed in the most and cleaned up the mess, like a saviour of sorts.

Our guitarist Jimmy “unknowingly” getting on the sleepers and waking up with only a towel on in some random gucci caravan in byron, it was a rad night, played a fun show at the Northern, we were getting a bit worried the next day when we couldn’t find him though, shout out to DickLord.

Everywhere, nowhere, its funny… Some times I feel like its from in our heads and then we hear similarities to a record I used to froth on… But as in bands, Stones, Queens, Arctic Monkeys, Rage…. there’s heaps, for a lot of different reasons.

Jumpin’ Jack Flash, as it defines rock n roll in my opinion

Soak up the love we’ve been getting for this release, got a few shows before the release of the EP on Nov 1, then back into the record… plenty on. 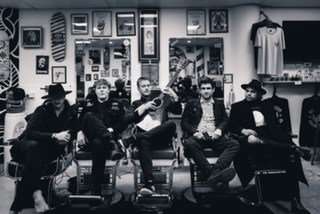 KingCoyotewill be heading out on tour throughout October and November, kicking off in Burleigh at Moe’s Desert Clubhouse on Friday October 4, then heading through Kingscliff to support Grinspoon, home to Port Macquarie for a series of shows, wrapping with a summer show on December 28 at Tacking Point Tavern (Port Macquarie) supporting Thirsty Merc.

Coca Cola is for fans of true, classic rock n roll; the kind of song that makes you want to slam your empty glass on the bar and head straight to the dancefloor. Evocative of rock auteurs Queens of the Stone Age, Them Crooked Vultures and Jet, Coca Cola is overflowing with heady guitar riffs and hooky vocals. Speaking on the inspiration behind the track, lead vocalist Sunny Rowlands enthuses, “This song is a bit of old time rock n roll, a throwback with our twist. Coca Cola was inspired by true love, about seeing the red flags and acting on it, before you lose too much time… or whatever the listener thinks it’s about really. We like both!”

Wild is a diverse collection of rock music by a group of seasoned musicians who know exactly who they are and what KingCoyoterepresents. From the exhilarating opener Running Wild, to the affecting, emotive closer Diamonds, the EP is true to its namesake in every sense of the word – this music is undeniably Wild. Produced by Michael Lynch (Jimmy Barnes, Midnight Oil, John Butler Trio), Wild meets the thematic golden trio – sex, drugs and rock n roll – head on, as Sunny says, “We’ve taken a bit of time with this EP, enjoying the road, the band bonding, the late nights, the long nights and all the in-between, helping us get the songs to the point that represents us truthfully as a band. It’s taken a couple of years, but it was worth the wait for us – it shows how far we’ve come and how far we can go.”

KingCoyoteare set to perform tracks from Wild live throughout October and November, with a diverse run of headline shows and support slots alongside rock legends Grinspoon,Thirsty Merc and First Beige. Revving up fans and letting them know what to expect, Sunny enthuses, “The shows will be high energy, loud, and in your face – like a shot of coffee with your Red Bull!”

Coca Cola is out NOW. Wild is out November 1

Tell us about your new single/ album/ tour? Our new single is called Love Your Man. The song is about a jealousy that warped my perception of a relationship I was in. The song travels […]

It’s been 7 years and 9 months since Mammal collectively drove their raw brand of Lamborghini rock ‘n’ roll straight off a cliff, but today the flaming fireball of visceral energy and groove known as […]

Tell us about your new album/ tour? I’ve been on tour since May when my new album Inner North came out. I tried to explore all facets of human relationships on the record using a folk/narrative songwriting style. […]

Tegan Voltaire, The Voltaire Twins
No set scene. We have played with a variety of bands from King Parrot to The Datsuns. Offer us a show and give us a try!
Los Hombres Del Diablo
Currently its the Yarra River Trail I’m walking along. Generally my scene would be Melbourne. Nothing feels or compares to home.
Simon McConnell, The Delta Riggs
Cool small bars with good food, good wine, good company
The Backsliders
Country roots, old time, bluegrass, folk, Americana scene Traditional plus :)
Whitetop Mountaineers
Yass KFC
Simon, Loon Lake
Our gigs have an air of danger and sex. Beautiful women are free to express themselves and are as dangerous as hell. Everybody can have a good time ’cos there’s a lot of love in the room and we just can’t help but stomp out that primeval swamp boogie ooze.
Chris Russell’s Chicken Walk
My scene is finding any excuse to dance with my 2 year old daughter Ruby.
Matthew Hardy, Comedian
Act III, Scene VI of King Lear. A tense and gripping scene wherein the ageing king informs his three daughters that they have all been accepted as contestants on Family Feud.
Ben Pobjie, comedian
Alice likes the Google. Sime likes taxidermy. It’s a pretty happening scene.
Sweet Jean
Experimental electronica, musical metacreation, multiplicitous media, hacking.
Ollie Brown
If you’re a Max Chillington then you’re our scene.
Gunslingers
Beer, riffs, good people, good food and new adventures, anywhere those things exist, that’s my scene!
Andy, Don Fernando
I don’t wish to belong to any scene that would have me as a member (with thanks to Groucho Marx).
Bob Spencer, Raw Brit
My scene is a Punk-hardcore scene or an underground, minimal electronic scene, something grungy – where everyone is wearing black. That’s my vibe; don’t go out until 11 when all the other vampires come out and go home when the sun comes up at 7. Oh shit. Creatures of the night.
Greg Puciato, Killer Be Killed & Dillinger Escape Plan
My bedroom
Nantes
All the kids who weren’t cool at school and still aren’t. Those people who didn’t manage to become awesome artists and uber hip performers. The raggy dolls who never found a way to make their raggy doll-ness work for them.
Jonathon Duffy
I have no idea what my scene is; I have been listening to Dubstep and a bit of Drum N Bass. I found a lot of Hip Hop and RnB stuff is getting very interesting again it is pushing different sounds out. I’ve been really into cycling since the early ‘90s; racing mountain bikes and racing road bikes. So between cycling and music there is not much time left, a bit of sleep now and again.
Mike Edwards, Jesus Jones
Wherever there is music is where I feel most at home
Toby Robinson
Anyone who welcomes a hairy, gold wearing, hot air blowing idiot to a dinner table is my scene.
Henry Wagons
Staying home out of harms way.
Peter Milley, Cairo Club Orchestra
When I’m not working in the studio or doing shows I’m at home with my partner and our baby so I guess they are my scene.
Way of the Eagle
World/folk. Acoustic and proud of it!
Ilana Cravitz, The London Klezmer Quartet
I like to think that I belong to the head-strong Independent Music Scene – where we – musos and audience and everyone in between – all make gigs/tours, recordings, releases happen for ourselves and work our arses off to keep it going for the rest of our lives – all for the love of Music!
Florelie Escano