Tell us about your new album ‘Run Around The Sound’ and upcoming tour?

We recorded the album at Castle Of Doom studios with the amazing Tony Doogan as engineer and producer. We hope it captures the spirit of the band and that everyone will enjoy these new songs as much as we do!  We will be on tour in the UK in June and super excited to be hitting the USA for the first time this July for our east coast tour. Particularly amped to play Merge Fest in Carrboro North Carolina celebrating 30 years of Merge Records!

Feels too hard to pick a favourite! It’s like picking a favourite child, it seems unfair, they are all so great but also so annoying! I think when we are working on new stuff we tend to flip between wishing we could turn back time to when we first started playing together and wishing we could stay in the moment when we are excited about something new. My current fave is Shame On Me from the new album, I think it captures this weird happy/sad feeling of joy or celebration but a sort of loss or longing at the same time.

Tell us a quick, on the road or studio, anecdote from the recording of ‘Run Around The Sun’.

One moment I really enjoyed was when we were working out a synth part for ‘How Far’ and I asked Lewis (from the amazing band Free Love) to play something that sounded like a steel drum. Lewis is a total synthesis wizard so when I presented him with that challenge I could see his eyes light up! He was like a mad scientist perfecting that sound and I was so impressed!

Where did the title come from?

A friend of mine was celebrating a birthday and toasted ‘here’s to one more run around the sun’ and it just occurred to me as a really nice way of describing a year. It makes the passing of all that time seem kind of breezy and effortless although it was probably nothing of the sort. I like this double edged meaning and I thought it summed up the feeling of this record really well as it’s at the same time both light and heavy.

Being in a back seat of a car driving in the Scottish countryside when the sun is out!

What’s next for you once your album is out?

Touring and more writing! We are touring the UK in June and going to the US in July.

We live in Glasgow so I guess that’s our scene! It’s a really wonderful city full of music and incredibly friendly supportive people, apart from the weather its been really good to us!

Sacred Paws have a natural inclination not to take things too seriously. You can hear it all the way through a conversation with its two members, guitarist Rachel Aggs and drummer Eilidh Rodgers, punctuated by rolls of giggles and thoughtful pauses, and you can hear it in the light touch they bring to their music, a jangly blend of indie-pop full of fizzing world rhythms and bright horns. “I think taking yourself seriously is always a bit scary,” Rachel says, laughing at the absurdity of the statement in a Serious Music Interview for a Serious Music Biography.

This new danger of taking things seriously is a by-product of winning the Scottish Album of the Year award in 2017 for their debut record, Strike A Match. Winning felt “very weird” to the two women whose aim had never been anything other than to make music they enjoyed and have fun with it. “To be like oh, ok, right – we have to believe in ourselves now?! It’s mildly challenging.” But if you thought that meant Run Around The Sun would be a po-faced follow-up rammed full of lofty pretentions, you’d be wrong. It brims with upbeat reflections on growing up and looking back. Shimmering guitar riffs dance between snappy beats and swooning melodies that will have crowds committing to far more than a simple head-bob. “I think we’d get bored if it was too slow,” Eilidh says. “We’d never want to play something live that people couldn’t dance to. It would feel really strange to us. It’s kind of the whole point.”

The first iteration of Sacred Paws was a long distance affair – Eilidh in Glasgow, Rachel, also a member of post-punk outfits Shopping and Trash Kit, in South London. They’d meet up periodically to write songs and Strike A Match was “all the songs that we happened to have, put on an album,” Rachel says. “We really didn’t think about it all that much. It was just like here are all our songs.” She recently moved from London to Glasgow – not a requirement of winning the SAY Award – and though it made little difference to the scrapbook approach Sacred Paws have to creating music, grabbing studio time here and there, it did lend Run Around The Sun a sense of focus. “It was a broader kind of gesture, like, a song – what is a song? Thinking about that a bit more.” Written and recorded in fits and bursts over the course of the 18 months up until November 2018, they had the mindspace to think more about the shape of the record too. “We did spend more time thinking, well, what would it be nice to have? Rather than, ‘Oh well these are the songs and what you get is what you get.’ We’d be like oh we’ve got one song left. Shall we make it a slow one?”

It was a friend celebrating a birthday by toasting, “Here’s to another run around the sun!” that lent the album its name. “You know when you hear a word and you suddenly keep hearing it everywhere? It was one of those,” Rachel recalls. “It just kept coming up.” Songs do tend to have a preoccupation with time and growing up, although that wasn’t a theme that the band really noticed until later. Brush Your Hair sees Rachel singing to her younger self, while Almost It deals with the phenomenon of looking back and realising you were exactly where you were striving to be and Is This Real urges you to take advantage of the present. “‘A run around the sun’ sounds so effortless but it’s such an understatement; that’s never what a year feels like! But it’s a useful way to think about it when you look back.”

It wasn’t until they began parsing the album for meaning that Sacred Paws realised they’d written a collection of songs about time. “We often sing over the top of each other, about completely different things and we never really talk about it,” Rachel explains. ”That means the songs always have really different ways that you could interpret them; but they both come from a personal place for both of us. So there’s a lot of potential depth in there but nothing is preconceived, it’s just not how we do things. We don’t even really know what’s going on…” “So we make it up,” Eilidh deadpans.

Opening with a scream of guitar and a Hey Mickey-esque beat, the album’s first track, The Conversation, was written about a long-forgotten argument between friends, composed in the band’s traditional haphazard approach, each member’s thoughts and feelings slaloming through the other’s. “You’re all wrong, you’re walking away/Why would we even try to have this conversation?” the song asks before resolving to move on – “I’m running, I’m hiding out, resisting

I’m keeping this to myself…” The argument that inspired it is long forgotten (“It was probably something really dumb”) but the feelings remain.

On Brush Your Hair, the band’s chopped and screwed style of lyric writing is most evident. Pop melodies simmer over insistent drums as they sing back and forth. “I’m kind of talking about lasting memories and how time and different things will remind you of people,” Eilidh says, going on to joke: “But I don’t know – what’s Rachel singing again? Something about brushing your hair?” “Er, I’m singing more at a younger version of me, actually,” she laughs.

The outcome of this approach is something unintentionally poetic. “It ends up like a cut up poem because we’re thinking about different things. That’s a nice combo because usually you are when you’re two people in a room, even if you’re having a conversation about the same thing, everyone’s thinking about different things. But we do respond to each other, it’s just that we don’t really talk about it.” And just as we’re in danger of getting too serious about the whole thing, Eilidh asks, “What, like we’ll sing ‘I know, I know’ at the same time?” and we’re laughing again. “Yeah, we’re just singing the same words.”

“A slow one” isn’t really Sacred Paws’ MO but there is, in fact, a slow one on Run Around The Sun. How Far was borne of a riff Rachel had been noodling about with for some time, and a desire to try their hand at writing something a bit different. Nestled in the middle of the album, it’s a slightly twinkly, stripped back meditation that inspires more of a sway than a pogo. Rachel wrote the bones of it alone at home (“A really nice, calm way to write songs!”) and brought it to a studio session to be built on. “It was sort of the first song we’ve done in a while that was carefully done, in that way.”

Meticulous planning, careful preparation, a masterplan – none of these are really Sacred Paws’ thing, and perhaps that’s why Run Around The Sun is such a vibrant, optimistic sashay of a record. It’s no surprise that winning more awards and making their millions isn’t what they aspire to as a band; “We’re just enjoying it and having fun with it,” Eilidh says. “The minute it stops being fun…” There’s a pause as if it doesn’t bear thinking about, before she concludes: “That’s not success for us.” 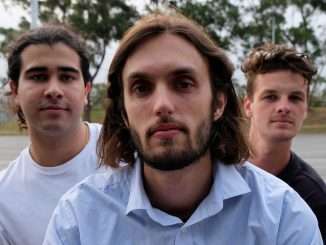