I’m really happy with how Still Shining and Ancient Light came out but I always have a soft spot for the currently unreleased “Ten Titles” project I recorded in Greece in 2010.

My old band Shooglenifty played the Festivale Internationale in Mexico in 2004. We began our set in the main square, the Zocalo, to a crowd of curious and bemused locals – listening to a dance-vibe version of traditional Scottish music. Following us on the bill was the then current Number 1 artist on Mexico’s top 40. By the end of the set we were playing around 100,000 people. Totally surreal experience.

A banquet made from the leftovers in the fridge. And chocolate.

Touring the Circuit shows, working on a duo album of traditional music with Kate Burke, writing a new project – music for Dreaming and building a house in Tasmania!

My scene is music with no genre boundaries, good conversations and good food. 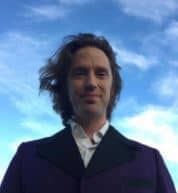 “They call themselves Luke Plumb & The Circuit and I can’t get enough of them. As I listen, Variety-style headlines are exploding in my mind. Boffo! Magnificent! Monstrous! I tell you, they are that good, enough so that I can’t sleep until I get this written.” – Frank Gutch Jr, NO DEPRESSION

Turn & ReTurn is the first new body of work released by mandolinist Luke Plumb after 12 years touring with the cult acid- croft hypno-folkadelic band, Shooglenifty and his subsequent return to Australia.  Conceptualised while walking home from a session in Edinburgh, Scotland, Turn & ReTurn is a bold release defying boundaries of genre. Drawing on 15 years of musical interactions from around the world, Plumb’s compositions are grounded in traditional musics and driven by dance rhythms.

Plumb describes the music as traditional form melodies arranged in the context of groove based songs with a rhythm section that is grounded in the drive of Cretan music and the fluidity of Terry Riley organ improvisations. Comprising of a twin frontline from Plumb’s searing mandolin and Eamon McNelis’ sinuous trumpet, driving twin acoustic guitars from Kate Burke and Jem Dunlop and locked together by Shannon Birchall’s double bass and Rory McDougal’s drums, this is a band made for live performances.

In his own words, “…I envisaged a gig fronted by duelling melodic lines on trumpet and mandolin, backed by a rhythm section drawing on the pulsating sound of Cretan lutes, the rebellious acoustic guitar style of Keith Richards and the Velvet Underground’s throbbing Moe Tucker drum sound. I knew the constituent parts and the effect they would have on the audience but the music itself needed to be discovered. It took 7 years to figure out what music would be the soundtrack to the experience I saw that night”.

Turn & ReTurn is the 5th album Plumb has worked on with revered Scottish folk industry icon Calum Malcolm (The Go-Betweens, Mark Knopfler, Stephane Grapelli, Capercaillie) as a producer/co-producer, and the 9th as a mixing/mastering engineer. Work on the album began in earnest when Malcolm travelled to Melbourne in 2016 specifically to commence work on this project.

Alongside the striking use of mandolin and trumpet as feature instruments on this recording, Plumb showcases his skill as a lyricist. “Lyrically, this album was written well after I had the instrumental parts completed and demos recorded, but they follow themes that I have been grappling with for a long time; the story our era will tell future generations looking back; the nature of belonging and what constitutes home; places to look for optimism in troubling times”.

“One of the great folk artists in Australia… this blew me away! The whole album is brilliant. Not only is [Luke Plumb] a great musician, he’s a great producer as well” – Paul Gough, PIMPOD

“Through his ground-breaking work with folk minimalist group ‘Senan’s Haggart’, his playing and composition that helped give ‘Shooglenifty’ new life, his duo with James MacKintosh and his solo work, runs a thread of sunny, assured, innovative and distinctly Australian music making.’ – Lucky Oceans.

Turn & ReTurn is out now through MGM.

It’s said that Christmas comes but once a year. And often – that’s enough for some. But someone – somewhere – has been very, very nice and Santa (in the form of Raised By Eagles’ Luke Sinclair wearing a dodgy red onesie and hat) has repaid both the favour and behaviour with the announcement of not one – but two – very special Raised By Eagles shows to help you celebrate Christmas in salubrious style and excellent company. […]

Sunday Morning Cinema is the new album from singer/songwriter and multi –instrumentalist  Dan Parsons, whose highly regarded talents have seen him in high demand for some fine artists including Marlon Williams, Kate Miller-Heidke, Ella Hooper […]

It’s said that Christmas comes but once a year. And often – that’s enough for some. But someone – somewhere – has been very, very nice and Santa (in the form of Raised By Eagles’ Luke Sinclair wearing a dodgy red onesie and hat) has repaid both the favour and behaviour with the announcement of not one – but two – very special Raised By Eagles shows to help you celebrate Christmas in salubrious style and excellent company. […]

Tegan Voltaire, The Voltaire Twins
Anywhere there is good company, great conversation, and a glass of red.
Helen Perris
Rock’n’Roll
About Heels on Decks
My scene is a Punk-hardcore scene or an underground, minimal electronic scene, something grungy – where everyone is wearing black. That’s my vibe; don’t go out until 11 when all the other vampires come out and go home when the sun comes up at 7. Oh shit. Creatures of the night.
Greg Puciato, Killer Be Killed & Dillinger Escape Plan
Well these days my scene tends to revolve around my computer and being nudged by my dog to take her out for a walk. And then having my wife shout at me for spending time on my computer. I’m loving it actually. I’m quite relishing that scene. I miss them both very much.
Peter Hook, Joy Division/New Order/The Light
World/folk. Acoustic and proud of it!
Ilana Cravitz, The London Klezmer Quartet
I will continue the continuum, singing my Songline.
Kutcha Edwards
I like the beach more than anything. The beach feels like home all year round. In terms of a scene…I actually prefer to hermit most of the time.
Abbe May
Quirky cabaret bars that serve a mean G&T and boast a stellar cocktail list..which is why you’ll always find me returning to The Butterfly Club! I also love the buzz of a Fringe or Cabaret Festival, or a smart Opening Night. Any excuse for a dress up, really!
Amelia Ryan, Lady Liberty