Which guitarist most influenced your playing?
Probably Adam Rafferty. I love his style & it was his early videos that I learnt from.

Describe your favourite guitar.
Currently I’m mostly playing my Takamine acoustic. It was my first decent guitar which I’m now using again but with nylons.

How do you prepare for a show?
Being a soloist it’s pretty much up to me what I play so I just figure out a setlist depending on the type of gig, practice loads, run through for timing, check gear etc, all the usuals I guess!

Which artist/band was/is your favourite to play guitar with?
I got to play with Tommy Emmanuel at one of his NZ shows a year or 2 back, & as a fingerstyle guitarist you can’t really top that!

Tell us a quick, on the road or studio, anecdote.
Ok well it’s not happened yet but it’s kind of interesting! I got the invite to play at the Melbourne Guitar show (I think thanks to Nick Charles who I met here in NZ at a folk festival) & was really keen to come over, play, see the show etc. Then a couple of weeks later my cousin Gary from UK got in touch (we’ve never met so far) & said he’s coming to AUS/NZ & would be cool to meet up. Well he’s Steve Hackett’s drummer, who I then realised was also playing at the guitar show! So not only do I get to play at the show I’ll also be meeting Gary & going to their gig in Melbourne on the Sat night. Plus I’ll be staying with a good friend I met at the Tamworth festival a couple of years ago. So yeah all in all it’s gonna be a great weekend! :)

What, or who, inspires you?
Just any great musicians really, not just guitarists, & any genre too (although really into jazz at the moment)

Which song do you wish you wrote the riff for?
Not really a riff but Jerry Reed’s Struttin is prob one of my favourite intrumentals, & one that I pretty much always play.

If you had unlimited money, what would your dream guitar setup be?
A Lowden Jazz series nylon guitar, not sure when but it will be my next guitar!

What’s next for you?
I’ve recently started my music degree here in NZ so I’m pretty much tied up with that for a few years. I want to carry on as a solo performer but also become a versatile session guy too so am really getting into the theory side of it.

What is the best thing about the Melbourne Guitar Show this August?
A whole show dedicated to guitar! Really looking forward to seeing all the stands, other players & of course playing myself

What’s your scene?
A bit of everything :) 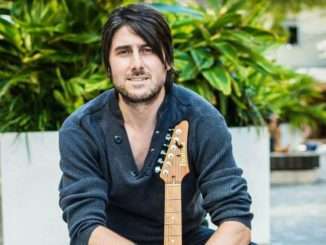