Tell us about your new single ‘Knife’?

‘Knife’ is a little different to our recent releases. It’s a conscious shift towards a more ballsier, rock influence and based around a mean guitar riff with raw drums. We’ve been testing it live for a couple months at our smaller shows and it quickly became a crowd favourite. We wanted to retain that rawness on the studio release and we were lucky enough to work with producer, Adrian Breakspear who absolutely killed it in capturing the live vibe.

I’ve recently rediscovered, and fell back in love with the ‘Broken Machine’ album from Nothing But Thieves. I saw them live at Factory Theatre late last year and it was one of the most incredible performances I’ve seen. Since then, it’s been nothing but ‘nothing but thieves’ in my ears.

We were touring Canada last year, strapped for cash and hungry. We chipped in $20 each and made the mistake of trusting our man, Jarred to go shopping and organise dinner for us to last the next few nights (expecting a big curry or spag-bowl). Instead, Jarred returned with $100 worth of expensive cured meats, olives and fancy crackers. It was gone within 5 minutes and we played 4 shows over the next 2 days sustained by only beer. We should have learnt our lesson after he’d order exclusively vegetarian pizzas only weeks prior, but we still love him.

We’d have to be supreme pizza. Many different flavours, all solid and a safe bet that 99% of people will enjoy.

So corny, but we inspire each other. It’s an incredible amount of fun and good times working in this industry but it can be rough as well. It’s crazy hours rehearsing, recording, mixing, travelling and performing. I think sharing that with four of the strongest and greatest dudes I know makes it actually happen. You look at how hard everyone else is working and you have to do the same.

While My Guitar Gently Weeps – The Beatles / Harrison. genius! 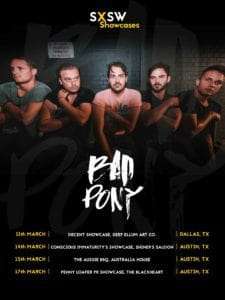 We are heading over to Texas for SXSW early March! We are all insanely excited for it! It’s been a goal of ours for a while now and we are so stoked to be invited. After that we are back in the studio to finish off the next single and then back to the States again for a long tour.

Our scene is wherever we can find live music and good people. The next best thing behind performing our music onstage is watching the other bands on the bill perform and hanging out with them backstage. We love kicking it with like-minded musos and shooting the shit.

Off the back of the successful release of their new single ‘Knife’, Sydney quintet Bad Pony continue to strive forward – eyes firmly set on returning to the international arena, announcing their official US dates for SXSW.

Bad Pony’s foray into this, the biggest music festival of its kind in the world, is an expected move for the Sydneysiders, having already clocked impressive shows and industry acclaim at other international showcase events including Music Matters (Singapore, 2016) and Canadian Music Week (2017). Since the release of their debut EP Limbo in 2015, the band were quickly poised as ones to watch in Australia, before turning that positive momentum into a solidified reputation as one of the east coast’s most formidable new indie bands.

“The country has produced many impressive electronic pop acts in recent years, and Sydney’s Bad Pony look like they may be next in line to break out”. SXSW

With four official festival showcases at SXSW lined up for Bad Pony in March, the experience is set to throw the band right into the depths of the chaos that envelops Austin, Texas for the duration of the event. Make no mistake though, these boys are ready for the challenge.

“It was like the opposite of watching The Notebook plus the feeling Forrest Gump had when he found out he was a Dad, PLUS the giddy ecstasy of realising you have Tim Tams in the fridge all at the same time. It’s been a dream of ours to even just to go to SXSW, it’s absolutely unreal that we get to showcase too.” – Mark Webber, Bad Pony

As new single ‘Knife’ has already proven, Bad Pony have the ability to switch up elements of their musical output on record to reflect the ever strengthening dynamic of the band’s live presence.

The saying goes that ‘everything is bigger in Texas’, so too are the vibes Bad Pony are ready to bring to the Americans next month!

Since the release of their 2015 debut EP ‘Limbo’, Sydney quintet Bad Pony have set a furious pace on the path to success. National radio play – check. Music Matters Singapore 2016 – check. Canadian Music Week 2017 – check. Australian Music Week Award Winners 2017 – check. Sold out headline shows – check. Publishing deal – check. 123 Agency deal – check. ArowAgency management deal – check. 1.6 million (and counting) combined streams – check. SXSW 2018 – check. Earning the indie outfit the well deserved reputation as one of the hardest working bands in the business, and the one to watch; “The country has produced many impressive electronic pop acts in recent years, and Sydney’s Bad Pony look like they may be next in line to break out”. SXSW

Following on from their 2017 release ‘Deficiency’ which reaped rave reviews; “Balancing grit with glam, the in-ya-face pop-electro confidence is built from a dominant — yet relatively sparse — grinding, mechanical rhythm, that bumps up against a more reflective side” Rolling Stone.  “Another banger from the group. Filled with soulful vocals, tasty riffs, pounding drums, and a brilliant chorus that will definitely see the track quickly become a fan favourite at upcoming shows” Tone Deaf, the electronic rock outfit have delivered their seemingly inexorable single ‘Knife’.

Recorded in house at the band’s Sydney studio, mixed by Adrian Breakspear (ARIA Producer of the Year winner, ARIA Engineer of the Year nominee – Gang Of Youths ‘Go Farther In Lightness’ + GRAMMY Album of the Year nominee – Pharrell’s ‘G I R L’) and mastered by Ben Feggans at 301 (Cut Copy, Dustin Tebbutt, Miami Horror, RÜFÜS, Dappled Cities) the results of working with the ultimate dream team are evident. “It was great to work on this track – it’s aggressive but with memorable melodies and hooks, and a satisfying challenge to make everything fit into place – hopefully the listener will agree it hits the spot!” – Adrian Breakspear.

‘Knife’ is out now! Catch them at SxSW! 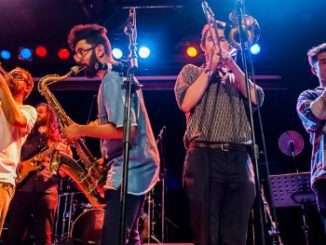