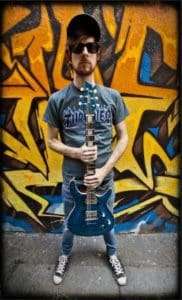 Tell us about your new single/ album/ tour?
New single is called ‘Celestial’ this is the first time recording real drums and bass and working with producer David Carr from Rangemaster and Martin Pullan from Edensound Mastering. We recently launched the song with 2 successful shows in Melbourne and Sydney and were really happy to have Melbourne completely sell out.

How long have you been playing guitar?
Ohh gawd, yeh it’s a long time… I’m gonna say about 20 years at this point.

Why did you first start playing?
My dad was a musician and was in bands when he was younger, he would always play us music at home so I was exposed to music at a young age, eventually I decided to start guitar lessons when I started high school and most of my friends were also learning so it was just the thing to do. I got hooked early, especially since my guitar teacher was such a cool dude.

Which guitarist most influenced your playing?
I would say, it’s not any one person in particular but many and for different reasons, I see guitar playing as a tool to songwriting and that’s where I draw most of my focus personally.

Some guys that have been influential to me include; Elliott Smith, Chris Conley (Saves the Day) Omar Rodriguez Lopez (The Mars Volta, At The Drive In) Chris Carrabba (Dashboard Confessional) Antoine Dufour, Tommy Emmanuel, Billy Joe, Tom Delonge, Mike Enzinger, Drew Goddard, Luke McDonald, Misha Mansoor, Dave Grohl, Kurt Cobain, Stephen Taranto… i could go on for quite a while actually I better stop.

Describe your favourite guitar.
Offft you’re going in with the hard questions here arent ya !! I feel like, it changes daily tbh, im really lucky to own some incredible guitars, and the one im using for the Melbourne Guitar Show is particularly special, its a Maton Custom Shop Dreadnaught acoustic built by Andy Allen. Its made from a somewhat rare wood called Zirricote and is the best acoustic guitar ive ever come across, I found it in a local music store called Sky Music, and ive since written a few new songs on it, thats always a sign of a great instrument when songs seem to just fly out of it. I also recently good a new Kiesel Electric guitar and it is another incredible instrument, it was custom built for me and it has some spectacular woods including Birdseye Maple neck, royal enony fingerboard and highly quilted (mastergrade) maple top. Sounds absolutely huge and is perfect in everyway.

How do you prepare for a show?
A lot of listening to Foo Fighters and just trying to build confidence to go out and bring the goods. I tend to go over all the difficuly licks of my set and just get warmed up in general, nearing the show, i just try to relax and remember to have fun and not get to stressed out.

I once met someone incredibly influential to me at one of our shows, this person was effected by some unknown substances and was a little crazy, I was so conflicted about the situation coz half of me wanted to hang out more but other half was fearing for my safety. So yeh, that was definitely interesting. I’ve been really lucky with everything so far, worse things to happen on tour have been missing flights and loosing a guitar by the airline, though I managed to get it back soon after.

What, or who, inspires you?
Any good music basically, when you find that one song that just moves you it definitly can inspire more creativity, also watching up and comig musicians on youtube is always motivating so much talent out there, it’s crazy.

Which song do you wish you wrote?
Sorry can’t list just one haha…

Churro’s fresh from the machine lightly drizzled in Spanish Caramel sauce. Its sweet, easy to eat, yet incredible complex and sophisticated

What’s next for you?
We are about to annonce an international run of shows, as well as preparing for our upcoming Europe/Uk tour with Caligula’s Horse and Circles this is gonna be a massive one with 25 dates including Euroblast Festival so we are very excited for it.

Honestly, it’s the dog park with all the doggo’s always a good escape, alternatively can’t beat a good metal gig with some ripping guitarists and good company. 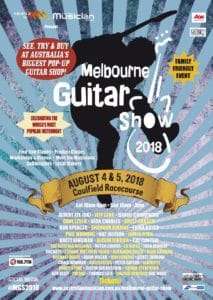 Following back to back sold out events across Australia and New Zealand, including last fortnight’s synchronised events at Sydney’s spectacular Cockatoo Island and Singapore’s iconic Marina Bay Float, SYNTHONY is thrilled to announce its return to Australia […]

Tell us about your new single ‘I Wrote A Letter’ I Wrote a Letter is a song I wrote really intuitively at a time when I was going through a few different transitions. It’s one […]

Tegan Voltaire, The Voltaire Twins
My scene is finding any excuse to dance with my 2 year old daughter Ruby.
Matthew Hardy, Comedian
Wherever there is music is where I feel most at home
Toby Robinson
My scene is Brunswick. I love it. It provides me with just about everything I need.
About Charlie Marshall
Leadfinger is a very strange band, hard to define, but we are free.
Stew, Leadfinger
Obviously to create music. My family. I love driving my Ferraris.
Yngwie Malmsteen
Sitting in the sun, in a nice chair, with a good book.
James Reyne
Melbourne. Nowhere else is as great as Melbourne.
Brat Farrar
Our scene is in the city of Bath, a small city with a very big musical identity, we play the British festivals and I am also in the ’choirs scene’. We are also in other bands for fun, music all the way, roll on summer!
Su Hart, Baka Beyond
What’s my scene? well…
And another thing I’ve been wondering lately
Oh, baby,
Tell me where have you been?
Now the stage is set
Where’s my Juliet, baby?
Is it maybe
My Midsummer Night’s Dream?
What’s my scene?
Clowns
Yass KFC
Simon, Loon Lake
“Malcolm Hill is a lifetime member of the Melbourne Music Mafia and part of the ratpack of post punk Melbourne artists who have been keepin’ it real across diverse art forms for thirty years.”
Malcolm Hill
Beer, riffs, good people, good food and new adventures, anywhere those things exist, that’s my scene!
Andy, Don Fernando
It’s Thonbury. It’s my dreaming. I’ve lived here 30 years and it’s evolved with me. The more I drink wine, the more wine bars appear in the neighbourhood. The more I eat, the more cafes appear in the neighbourhood. Fantastic.
Denise Scott, Comedian
Hot, hot lovers
Luke Monks, Gay Paris
World/folk. Acoustic and proud of it!
Ilana Cravitz, The London Klezmer Quartet