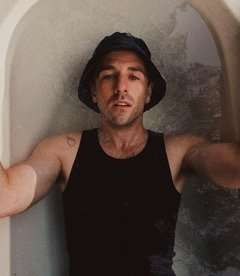 21 is about changing and growing into yourself as an individual and young adult, and being bloody terrified in the process. I realised that I had been running off steam and out of trauma and anxiety of things that happened to me as a kid, I was just depressed and quite a careful almost jumpy kid…. looking back on that at the time of writing this song I felt like I had been wasting time about shit I was afraid of. I wrote this one in a bout 15 minutes. First thing that came out was that “HELLO, IM A WEIRDO HERES A SONG” part and I thought that would be the verse and I would then write a chorus n all that. I just couldn’t get that first bit outta my head so I just sang it again after I just fumbled the verse out and was like “that’s it!”. Those are my favourite songs!, the songs that come out so quick it’s almost like somebody dropped the whole song in your lap……That’s why I always say EARS TO THE SKY! you gotta keep your soul open and ready for that shit!

What’s your favourite work that you’ve created at this point in time?

There’s most likely a couple now that just aren’t released. I’d have to stay quiet about that for a little while at least ahahah but the work I am most proud of that’s out is 21! As soon as I started being honest in my songs I couldn’t stop and I’m loving it! Music is now a bigger emotional outlet than it’s ever been before for me.

Some sort of asian fusion dish ’cause I’ve got lots of influences from sooooo much music; there’d be heaps of ginger in there and chilli too ’cause the music is slightly aggressive in its lyric form so that can be represented through spice. I almost sound like I’ve thought of this before but I haven’t….. I just really like food! ahahah

I had just broken up with a girl who I was with for a year or so, this is going back a few years now! anyway we had broken up a few weeks before and she rocked up to a show of mine holding a mutual mates hand. I was pretty livid so I just started writing a really fucking angry song on the spot specifically directed at the 2 of em. I don’t remember if it was any good or not but it was definitely called for it as I found out after that show that she had been with him when we were still together! broke my heart. To be honest though I’ve probably got loads of little weird and odd stories like that ahahah and maybe ones that aren’t so sad ahahah!

MUSIC, VISUAL ART EXTREME SPORT AND ATHLETES! Loads of stuff really, doesn’t take much for me to be inspired. My dad really inspires me, he’s just had cancer and gone through hell with stem cell transplant and all kinds of shit. It’s amazing how he has been so positive along the way while having such a debilitating illness! and that’s inspiring to me, somebody who’s going through horrible circumstances but not letting it get em down and just rinsing it despite it! he’s a trooper my dad, and a good man.

COMPLICATED by AVRIL LAVIGNE! there’s others by like Radiohead and Oasis n all that but atm I think it would have to be that song! I’ve been coming back to that whole LET GO record lately cause I grew up on it and I’ve kind of come full circle to all those types of songs :)

Just keep on writing, releasing and playing gigs! I have a folder on my laptop of so many bloody tunes it’s not funny so I gotta get that all ready with the team and see what order we should release this shit in :) I’ve poured my soul into this stuff so I’m excited to see who connects with it!

I haven’t really got 1 I suppose. I’ve got a bunch of mates from all sides of australia! we are all completely different from personality, to the clothes we wear, to the jobs and aspirations we have! I love it that way! they’re just good people really! Now that I’m back in WA though I do miss Melbourne so who knows, might go back over there at some stage, that might be my scene again! who knows! TO THE SKY! 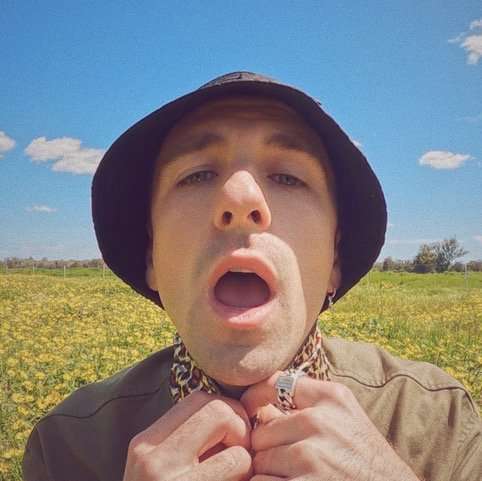 ELI GREENEYES ANNOUNCES NEW SINGLE AND VIDEO21 OUT NOW!
Eccentric and brash, Eli Greeneyes has today announced his deeply confessional new single 21, a chaotic yet content exploration into getting older and losing control, out today, November 25.  The moving single is accompanied by a scenic video clip, filmed in collaboration with the artist’s closest friends.  After a relocation back home due to COVID-19, the release of 21 feels poignant – a young person wondering what on earth is going to happen next.

Evocative of exciting artists such as YUNGBLUD and DMAs, but also with clear influences from the classics – Oasis, ­The Verve – 21 has that instant-classic feel; like a song you already know, but can’t place.  It feels ready-made for summer, roadtrips, lazy afternoon swims and drinks in the backyard.  Guitars glisten, percussion rambles along at a reassuring pace – but the real star is Eli Greeneyes’ ear-catching vocal.  Speaking on the inspiration behind the track, Eli explains, “I wrote it in about 15 minutes about how depressed and scared I was about living my life the way I truly wanted to at 21 years old…I  was becoming my own person and for some reason the thought of that was terrifying.  A lot of this song is about figuring out who I am and feeling like I realised it too late, looking back at wasted time and how I wasn’t sucking the marrow out of life like I should’ve been. I was so pent up with childhood trauma and all that bullshit that I wasn’t seeing and enjoying all the positive things in front of me.”

The clip for 21 feels as warm as the track itself, perfectly set in a deeply saturated lawn with a knowing nod towards the 90s influences behind the song with the use of a fisheye lens.  The clip was made in collaboration with his close friend Connor Maher and partner Alex Maher, as Eli reflects,  “I have never made a multi shot video before (only one shots), so the video is basically me not knowing what I’m doing and trying a whole bunch of angles and speeds of shooting.  Just singing the song at the lens around the farm.  I did have the shots planned-ish in terms of being slowed down or sped up, but that’s about as much planning that went into it…just a cool clip!  I really like learning by just doing things I guess and getting my girlfriend or my mate to just point and shoot and see what happens.”

Mixed by Andy Lawson (Little Birdy, Eskimo Joe, Gyroscope) and mastered by William Bowden (Gotye, The Middle East, Miami Horror), 21 feels like a time capsule, something to look back on to remember what you were feeling during a particular time in your life.  Personalities, thoughts, beliefs – these are all things that are subject to change, as Eli concludes, “At that age, I did the best I could, and will always be figuring it out.  No one person is 100 percent buddha with all the answers. We’re all bit of a mess sometimes but I feel on the other side of that mess is a power that can’t be taught by being scared or worried all the time.”

About Mary Boukouvalas 1248 Articles
Mary is a photographer and a writer, specialising in music. She runs Rocklust.com where she endeavours to capture the passion of music in her photos whether it's live music photography, promotional band photos or portraits. She has photographed The Rolling Stones, KISS, Iggy Pop, AC/DC, Patti Smith, Joe Strummer, PULP, The Cult, The Damned, The Cure, Ian Brown, Interpol, MUDHONEY, The MELVINS, The Living End, Foo Fighters, Smashing Pumpkins, Rage Against The Machine, The Stone Roses –just to name a few - in Australia, USA, Europe and the Middle East. Her work has been published in Beat magazine, Rolling Stone magazine, Triple J magazine, The Age Newspaper, The Herald Sun, The Australian, Neos Kosmos, blistering.com, theaureview.com, noise11.com, music-news.com. She has a permanent photographic exhibition at The Corner Hotel in Richmond, Victoria Australia.
WebsiteFacebookTwitterYouTube

For the month of May, leading up to the Sydney Drum & Percussion show, What’s My Scene will be celebrating DRUMMERS. Stay tuned for our exclusive Q&As, Snap Scene features, and much much more. Australian Music Association has […]

Tell us about your tour & vinyl launch? Well, despite popular demand and 15 years on our side we’ve never pressed vinyl for our debut album Breakfast At Fatboys. Now we finally have and we’re […]

Our scene is in the city of Bath, a small city with a very big musical identity, we play the British festivals and I am also in the ’choirs scene’. We are also in other bands for fun, music all the way, roll on summer!
Su Hart, Baka Beyond
Currently its the Yarra River Trail I’m walking along. Generally my scene would be Melbourne. Nothing feels or compares to home.
Simon McConnell, The Delta Riggs
Deep 70s disco, wonky synths, shady lyrics, fairy lights and cheap wine.