Tell us about your new single ?

It’s called Duo Monophonic Explorations, Volume 1. It’s quite involved, so have a look here for the explanation http://daveylane.com/new-7-release-duo-monophonic-explorations-vol-1/

How would you describe your sound in food form and why ?

Of mine? I’m the wrong person to ask, I never think of what resonates, which is probably why my music only reaches a handful of people I guess. I just let the creative process do its thing and once the songs are hatched  they’re out in the ether for other people to interpret however they like.

NO. NOTHING FUN EVER HAPPENS ON TOUR. IT IS BASICALLY A LIVING HELL.

I’m a big comedy fan and I draw a lot of inspiration from that oddly – I’m not a witty or naturally funny person but I like funny music – not funny in a novelty Flight Of The Conchords sort of way, more in a Nick Lowe darkly self-deprecating way or someone like Todd Rundgren, who is a genius – playful musically, listen to a record like A Wizard, A True Star. It’s almost comically schizophrenic in its structure – you tell he would have been constantly cracking himself up in the studio with the crazy shit he’s coming up with. I know that sort of attitude toward making records doesn’t resonate with everyone (see second last question) but that’s what I love.

I’ve recorded 4 singles – I’d put them all out tomorrow if I could. I’m constantly looking to the next thing.

Not to get all “Russell Hammond’s last words to Rolling Stone Magazine” here, but rock ‘n roll music is my scene – it’s my job, its my hobby – everything in my life revolves around it in some way or another and who am I to complain about that?

Having played alongside some of the biggest faces in Australian and international music, and conquering stages all over planet Earth; Davey’s journey into the solo stratosphere is supported by his recent achievements. Sharing stages with the likes of Todd Rundgren, Beady Eye, Wolfmother and Bob Mould, being voted among the top 25 Australian guitarists of all time in a News Corp poll earlier this year, and invited to cover a song on a tribute album for Lenny Kaye’s legendary garage-psych compilation Nuggets: Antipodean Interpolations of the First Psychedelic Era, Davey continues to create a curvature on a flat planet. 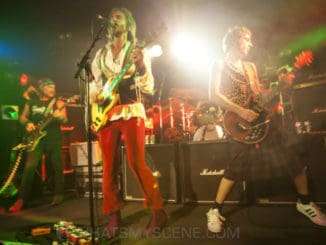 Tunes, mates, and honesty. No dickhead policy!
Buddha In A Chocolate Box
Going to the river on sunny afternoons with the blow up dingys and resting your beers on lily pads.
The Frowning Clouds
Well these days my scene tends to revolve around my computer and being nudged by my dog to take her out for a walk. And then having my wife shout at me for spending time on my computer. I’m loving it actually. I’m quite relishing that scene. I miss them both very much.
Peter Hook, Joy Division/New Order/The Light

I like to think that I belong to the head-strong Independent Music Scene – where we – musos and audience and everyone in between – all make gigs/tours, recordings, releases happen for ourselves and work our arses off to keep it going for the rest of our lives – all for the love of Music!
Florelie Escano
I love being on a little boat near home in South West Victoria with a fishing line in the water, the Sun coming up or going down. I also love walking the streets of Melbourne or Manhattan or many of the beautiful towns and villages of Ireland or anywhere. My partner and my family are central to it all. I also love being in the midst of a great music session, anywhere, anytime, being transported into the soul of the Universe.
Shane Howard
I think my style is more just making cameos in everyone else’s scene.
Mojo Juju

I’m in with the Out-Crowd
Dave Warner
No set scene. We have played with a variety of bands from King Parrot to The Datsuns. Offer us a show and give us a try!
Los Hombres Del Diablo

Act III, Scene VI of King Lear. A tense and gripping scene wherein the ageing king informs his three daughters that they have all been accepted as contestants on Family Feud.
Ben Pobjie, comedian
When I’m not working in the studio or doing shows I’m at home with my partner and our baby so I guess they are my scene.
Way of the Eagle
I don’t wish to belong to any scene that would have me as a member (with thanks to Groucho Marx).
Bob Spencer, Raw Brit

Right now it’s a room with no lights on. An unmade bed. A laptop with 9% battery and a mosquito that just refuses to die.
Dave Larkin, Dallas Crane
Staying home out of harms way.
Peter Milley, Cairo Club Orchestra