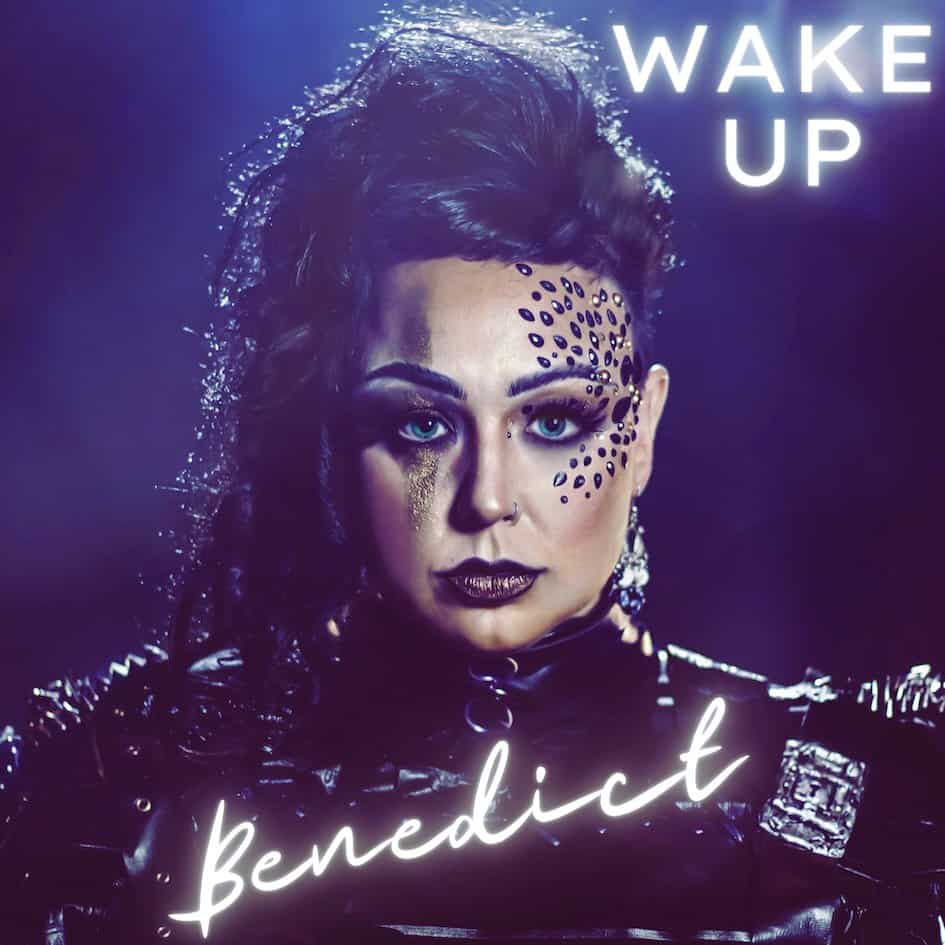 Tell us about your new single ‘WAKE UP’?

Wake Up  was born with a deep desire to speak out for the voiceless! The forgotten people! The many who have suffered at the hands of unjust situations.  Wake up is a people’s anthem. I saw a need to speak out for all peoples, all nations with the shocking things we have witnessed over the last few years, through government issues, wars, COVID-19, Black Lives Matter and injustices for the LGBTGIA+ community. We all fight one another, but what is the truth? The truth is that we are all human. We easily forget this and  are indoctrinated into many different ways of thinking that can cause serious division. If we can come together, break down fear, lies, and fight the division, we will be free.

I have some new works in the making which I cannot wait to share with you all as well as some other ones that have been waiting to be recorded for a while. It is hard to say what is my favourite as each piece has a special connection and space in my heart. They are like my babies! Each one is a piece of my heart.

Haha! Good question! I would say dark chocolate. Deep in colour, rich in flavour, layered, unique and not everybody’s cup of tea but will not disappoint. As well as healthy for the soul and body! Can lower and calm your blood pressure and bring you some ease to your brain through the quality of it.

In the studio with my  genius producer Dean tuza. The equipment and knowledge Dean has is beyond insane! Two things he has used in my recordings that felt like a dream. A Roland 808 on Warzone track! This is a beat machine that Michael Jackson made most of his beats with! He got me to jump in it and create the beats. My brain was exploding with pure bliss! And to top it off,  Dean then got me to sing on a microphone that Bowie had used! I literally felt like I had died and gone straight to heaven!

So many inspirations over the years. What has really come through for my project now are inspirations such as Bowie, Prince, Michael Jackson, Kate Bush, Tori Amos, Queen, Janis Joplin, Elton John, Joan Baez. And the list keeps going. I grew up in the 80’s/90’s and I have been lucky enough to be immersed in some of the best music in the world through my parents.

Another inspiration is my passion for humanity and experiences working with youth over the years and also as a prison guard.

It broke my heart and inspired me watching, what I call “the forgotten people” from an everyday community be let down by the system. The pain. Their stories. As a humanitarian and a person who is passionate about equality and social justice, my desire runs even deeper to be a voice for all who aren’t heard! All communities. All people.

Oh there are so many!  But the first that came to mind is Queen’s – Bohemian Rhapsody! An anthem for so many over so many years! The unique movement of the song is a stand alone! Freddie’s vocals with that music, OMG!

Fingers crossed if all stays open in Melbourne I will be doing my single launch for ‘Wake Up’ at the Toff In Town on the 9th September. This is so special for many reasons but mainly I have not played a show since Nov, 2019 due to covid hitting the world!

I am also in the process of putting together my next single. Then the aim after that release will be an EP/Album. Hopefully with Lee Groves in New York. If I can get there with all these restrictions.

What would you most like to be remembered for?

Bringing some hope and light to hearts and people across the world! Being a light to the nations and an artist and human that has hopefully been a voice for people who had no chance to speak their truth! And then I would hope that I can lead by example enough to spark others to write and sing to inspire lives and call for change!

My scene is a dimlit studio, writing a new song with a whiskey in my hand, winter days, rain falling outside, fireplace roaring and creating musical magic!

Inventive and compelling, Melbourne based multi-hyphenate singer songwriter Benedict has today shared their powerful new single Wake Up, an anthemic call to action that speaks on behalf of all humanity, calling for understanding and peace.  Wake Up is out today via Tomboi Records, and accompanying the track is a visually stunning and deeply emotive clip, co-directed and choreographed by Benedict, Andy Chappell and Kelly Thomas. Benedict will also be launching the release with an intimate show at The Toff In Town on September 9.

Haunting, passionate, and evocative of the alluring Massive Attack, legendary David Bowie and inimitable Prince, Wake Up is pervasive and truly moving.  Produced by Dean Tuza (Stella Donnelly, The Rubens, Mossy) and mixed by legendary NYC-based producer Lee Groves (Madonna, Depeche Mode), soft synth pads create a perfect bed for Benedict’s poignant and nuanced vocal style, while colourful strings swell and propel the track forward, lingering and persuading the listener to pay attention.  When confiding in close friend and singer songwriter Chrissi Deralas over a zoom call, Wake Up was born in just ten minutes.  Speaking on the inspiration behind Wake Up, Benedict explains, “Wake Up is a people’s anthem.  I saw a need to speak out for all peoples, all nations with the shocking things we have witnessed over the last few years, through government issues, wars, COVID-19, Black Lives Matter and injustices for the LGBTGIA+ community.  We all fight one another, but what is the truth?  The truth is that we are all human.  If we can come together, break down fear, lies, and fight the division, we will be free.”

An impactful song such as this requires an equally significant video – and the clip for Wake Up absolutely does not disappoint.  Through considered choreography, moody, staccato lighting, and footage from historical protests spliced in, Benedict has created a perfect visual accompaniment to Wake Up, and it enhances the original meaning of the song ten-fold.  It’s a must-watch, as Benedict says, “When I thought about the film clip, the words that came to mind were unity, hope, world issues, our reality.  I wanted to bring to light the suffering, pain, serious nature and traumas in this world we as humans experience and bring on each other – also, lies we believe from the government that cause division and brokenness within our society.  In contrast, I then wanted to show the similarities as humans that we all carry everyday.  I wanted to show that we are better together and, living in this controlled and manipulative societal structure, we could find peace and freedom by clinging onto each other.”

Benedict has always been drawn to a strong message, and always one to stand up against injustices in the world.  They even started their own record label, Tomboi Records, with the goal of representing the under-represented within the music industry, as they explain, “My label aims to represent women in music and LGBTQIA+ artists in music.  Two minorities that I believe do not get enough support in the music industry.  Being a non-binary person myself, I felt the need to create a safe label where artists can create and be themselves with full support behind them.  I have experienced both sides of discrimination and lack of support with the minorities I am representing, so I thought, ‘why not’!”

Wake Up is out now.

Check it out here!

About Mary Boukouvalas 1477 Articles
Mary is a photographer and a writer, specialising in music. She runs Rocklust.com where she endeavours to capture the passion of music in her photos whether it's live music photography, promotional band photos or portraits. She has photographed The Rolling Stones, KISS, Iggy Pop, AC/DC, Patti Smith, Joe Strummer, PULP, The Cult, The Damned, The Cure, Ian Brown, Interpol, MUDHONEY, The MELVINS, The Living End, Foo Fighters, Smashing Pumpkins, Rage Against The Machine, The Stone Roses –just to name a few - in Australia, USA, Europe and the Middle East. Her work has been published in Beat magazine, Rolling Stone magazine, Triple J magazine, The Age Newspaper, The Herald Sun, The Australian, Neos Kosmos, blistering.com, theaureview.com, noise11.com, music-news.com. She has a permanent photographic exhibition at The Corner Hotel in Richmond, Victoria Australia.
Website Facebook Twitter YouTube

LUCKY SCENE: For your chance to win one of the following DVD releases from Shock, simply: Subscribe to the What’s My Scene newsletter *If you’ve already subscribed, just let us know in your email. Email win@mandyh30.sg-host.com with the name of […]

Track-by-Track of WILLING & ABLE by INKLINES Mylar The opening track ‘Mylar’ sets the pace for this EP, with a build-up straight into an explosive and catchy intro riff heard throughout the song. The synchronised […]

Tegan Voltaire, The Voltaire Twins
Well I’m still looking for my scene, and I think I might have found it. Between the pages of What’s My Scene Magazine.
Dave Faulkner, Hoodoo Gurus
Aside from music and everything creative, I love open-mind people, unexpected humour, seeing the world and nature, riding my bicycle, playing billiards. I’m also a fan of coffee, whiskey and most things vintage.
Jessica Stuart Few
Alice likes the Google. Sime likes taxidermy. It’s a pretty happening scene.
Sweet Jean
Anyone who welcomes a hairy, gold wearing, hot air blowing idiot to a dinner table is my scene.
Henry Wagons
I like to think that I belong to the head-strong Independent Music Scene – where we – musos and audience and everyone in between – all make gigs/tours, recordings, releases happen for ourselves and work our arses off to keep it going for the rest of our lives – all for the love of Music!
Florelie Escano
Local bands at sticky carpet venues. Vinyl. Social networking. Keeping healthy in order to play full throttle live sets. Loud rehearsals. Good people with creative ideas. PRIMITIVE ROCK.
Jon S Williams of City of Cool
The beach. Tea with gin at your grandparents house. They have the best stories.
Betty & Oswald
Obviously to create music. My family. I love driving my Ferraris.
Yngwie Malmsteen
What’s my scene? well…
And another thing I’ve been wondering lately
Oh, baby,
Tell me where have you been?
Now the stage is set
Where’s my Juliet, baby?
Is it maybe
My Midsummer Night’s Dream?
What’s my scene?
Clowns
Comedy, surreal show girls, burlesque and theatre
MC KREWD
The Astor Theatre on chapel st. Old cinema with copious amounts of atmosphere playing classic films (Chaplin, Gene Kelly, Kubrick, etc) and me with a honeycomb choc top spilt on my Tshirt because that’s just how I roll.
Jude Perl, Comedian