Tell us about your new single/ album/ tour?
Our new single is called Space Cadet. It’s an intergalactic anthem about outer space. The song features two huge whammy screaming guitar solos and a bass solo. It’s a fusion of psych, pop and kraut rock. we’ve been touring the single for two months across Australia; Melbourne, Sydney, Wollongong, Newcastle, Goldcoast, Sunshine Coast, Brisbane, Perth and Albury. We’ve worn our costume made Space Suits and our fans have also come dressed in their own space themed costumes. It’s been far out!

How long have you been playing guitar?
I’ve been playing for three years. I started out as a drummer and then taught myself guitar as a songwriting tool which developed into a live performance tool.

Why did you first start playing?
I started playing drums in primary school mostly to rebel, to be the cool, tom boy. I was always a dancer. I had blonde hair and blue eyes, I was the school captain and it was expected that I should be lady like, so choosing the most un-lady like instrument was so naughty. I started playing guitar because I was songwriting in another band and playing drums. this meant I was always dependant on other musicians to created the chords and instrumental compositions to my vocal melodies. I learnt the guitar because i wanted to be more independent.

Which guitarist most influenced your playing?
Probably Joan Jet, she made it look easy with basic power chords.

Describe your favourite guitar.
I love flying v guitars because they just look so damn awesome but they are uncomfortable. I’m yet to play my ‘favourite’ guitar because i don’t think i’ve played it yet. I’m looking for something super small and light weight, short neck, tiny body that sounds like a chainsaw.

How do you prepare for a show?
Vocal warm-ups and guitar warm-ups. I try to keep to myself prior to shows to reserve my energy and voice, drink lots of water and sound check.

Tell us a quick, on the road or studio, anecdote.
Sleep, eat healthy, drink water and maximise every single interaction with bands and venue staff.

What, or who, inspires you?
I’m inspired by my end goal. My end goal is to raise humanity. When I feel overwhelmed with little challenges and when I feel hard done by and exhausted I think of the starving children throughout the world that have it harder then me.

Which song do you wish you wrote?
Landslide by Fleetwood Mac.

How would you describe your sound in food form and why?
Probably one of the wizz fizz packets that explode in your mouth.

What’s next for you?
We’re recording new music in between our appearance at The Melbourne Guitar Show/Cherry Bar Afterparty Show, then King Street Crawl in Sydney, some local Sydney shows and then launching the new music with some single launches across the country in October and some all ages shows in November. 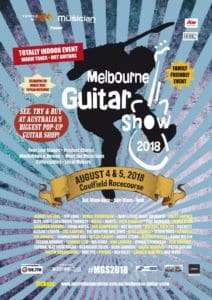 Tegan Voltaire, The Voltaire Twins
Currently its the Yarra River Trail I’m walking along. Generally my scene would be Melbourne. Nothing feels or compares to home.
Simon McConnell, The Delta Riggs
My scene is driving fast cars and shooting guns.
Ace Frehley
My scene is at the moment Big Wongs General Tsos Chicken as I get sauce on the keys typing to you :-)
Brian Mackey
My scene is finding any excuse to dance with my 2 year old daughter Ruby.
Matthew Hardy, Comedian
I will continue the continuum, singing my Songline.
Kutcha Edwards
When I’m not working in the studio or doing shows I’m at home with my partner and our baby so I guess they are my scene.
Way of the Eagle
Comedy, surreal show girls, burlesque and theatre
MC KREWD
I like to think that I belong to the head-strong Independent Music Scene – where we – musos and audience and everyone in between – all make gigs/tours, recordings, releases happen for ourselves and work our arses off to keep it going for the rest of our lives – all for the love of Music!
Florelie Escano
My scene is a Punk-hardcore scene or an underground, minimal electronic scene, something grungy – where everyone is wearing black. That’s my vibe; don’t go out until 11 when all the other vampires come out and go home when the sun comes up at 7. Oh shit. Creatures of the night.
Greg Puciato, Killer Be Killed & Dillinger Escape Plan
Well I’m still looking for my scene, and I think I might have found it. Between the pages of What’s My Scene Magazine.
Dave Faulkner, Hoodoo Gurus
I am a simple man. My scene is simple. I like playing metal and spending time with my family.
Waclaw ”Vogg” Kieltyka, Decapitated
Book clubs, philosophy and extreme black metal
Elsen Price
Well these days my scene tends to revolve around my computer and being nudged by my dog to take her out for a walk. And then having my wife shout at me for spending time on my computer. I’m loving it actually. I’m quite relishing that scene. I miss them both very much.
Peter Hook, Joy Division/New Order/The Light
What’s my scene? well…
And another thing I’ve been wondering lately
Oh, baby,
Tell me where have you been?
Now the stage is set
Where’s my Juliet, baby?
Is it maybe
My Midsummer Night’s Dream?
What’s my scene?
Clowns
Experimental electronica, musical metacreation, multiplicitous media, hacking.
Ollie Brown
Flanelette pyjama pants.
Timberwolf
Scones, savory, sweet I don’t mind
The Wooden Sky
Going to the river on sunny afternoons with the blow up dingys and resting your beers on lily pads.
The Frowning Clouds
I don’t wish to belong to any scene that would have me as a member (with thanks to Groucho Marx).
Bob Spencer, Raw Brit
Hot, hot lovers
Luke Monks, Gay Paris
My bedroom
Nantes
I think my style is more just making cameos in everyone else’s scene.
Mojo Juju
Ep. 1 Series 3 of BBC’s ’Sherlock’ where Sherlock bungee jumps through a window and kisses Molly Hooper.
Miss Adelaide Everheart from Early Burley Burlesque
Anywhere there is good company, great conversation, and a glass of red.
Helen Perris
Staying home out of harms way.
Peter Milley, Cairo Club Orchestra
I have no idea what my scene is; I have been listening to Dubstep and a bit of Drum N Bass. I found a lot of Hip Hop and RnB stuff is getting very interesting again it is pushing different sounds out. I’ve been really into cycling since the early ‘90s; racing mountain bikes and racing road bikes. So between cycling and music there is not much time left, a bit of sleep now and again.
Mike Edwards, Jesus Jones
Bed. Pringles. Whisky. Attenborough doco. Wham.
Marlon Williams
Beer, riffs, good people, good food and new adventures, anywhere those things exist, that’s my scene!
Andy, Don Fernando
Right now it’s a room with no lights on. An unmade bed. A laptop with 9% battery and a mosquito that just refuses to die.
Dave Larkin, Dallas Crane
No set scene. We have played with a variety of bands from King Parrot to The Datsuns. Offer us a show and give us a try!
Los Hombres Del Diablo
Obviously to create music. My family. I love driving my Ferraris.
Yngwie Malmsteen
Currently, I’m completely enveloped by writing my book; trying to complete the manuscript for my tome.
Jeff Duff