Xylouris White, the new outfit for Dirty Three drummer Jim White and Cretan lute player George Xylouris, makes its Australian debut this summer after tours in the US and Europe. They will be performing in the Sydney Festival, Hobart’s MONA / FOMA Festival and a one-off Melbourne headline show.

Both Xylouris and White are setting out on a rare adventure in music. Each continues to be pre-eminent in his field, but both have decided to bring together the best of their very disparate traditions into a new kind of universal music. 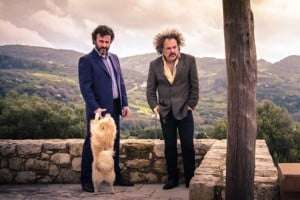 Emerging from Australia’s fertile post-punk scene, Jim White has become one of the most beloved and instantly recognizable drummers of today. Best known for his long-running role in Dirty Three, Jim is a powerful and original player who has flourished in many settings, having collaborated, toured and recorded with a wide array of brilliant artists over the years, including Bill Callahan, Cat Power, Will Oldham and PJ Harvey .

George Xylouris is Crete’s most loved and inventive lutenist, having taken his instrument from a mainly rhythmic role to an excitingly melodic one. He and Jim met through mutual friends on the Melbourne music scene when Xylouris was living in Australia in the early ‘90s. George sat in with Dirty Three on occasion. Later White and Xylouris accompanied Cretan lyra master Psarandonis on a couple of tours before forming Xylouris White. Through a series of live performances and recording sessions in Greece, Australia, and New York City, the duo forged a new sound.

Xylouris makes the lute a lead instrument—a trait he has in common with White, whose drumming often takes a collaborative, participatory role in his work with other musicians. New Yorker Sept 4 2014

Both are extraordinary musicians. From a distance, in market terms, one is a traditional artist and the other a nontraditional one. . Onstage… they look and play like brothers.…the two men have created a hybrid form that they both seem born to…Their music starts with old Cretan forms … and spreads outward into loose, sympathetic improvisations of uncertain length, the kind of thing that has been at the center of each man’s music for a long time.

GOATS the debut album for Xylouris White completes the picture. Produced by Fugazi’s Guy Picciotto, it brings together these varied and inspired personalities to create something undeniably fresh and impossible to categorise.

Xylouris’ playing is a sombrely beautiful thing… White, is such a presence on the kit that his percussion has the sense of a lead instrument. Guy Picciotto produces, flatly and cleanly in a way that plays to the music’s strengths. UNCUT October 2014

Tickets for all Australian shows are on sale now.

Goats by Xylouris White is out now on Other Music Recording Co.

The interplay between these two unparalleled musicians makes for an exhilarating, barrier-smashing live show unlike anything you have ever seen – Sydney Festival Programme

After a 13 year hiatus ARIA nominated, Australian metal outfit SUPERHEIST are back and one thing is for sure, they are here to RAISE HELL. The band who have achieved gold record status and previously […]

Darren Hart’s scene is “pretty chill”. The Melbourne-born artist, guitarist, songwriter, producer, known as HARTS, explains: “I don’t really go out too much. I love music, I create music whenever I want, I’m into video games. I’m into […]

Tell us about your new single/ album/ tour? Just Like A Needle is the single that we are taking to Sydney, Hobart and Melbourne. We started recording it in a barn in the south of […]

Tegan Voltaire, The Voltaire Twins
Any scene with Al Swearangen & Mr. Wu from the show Deadwood ;)
Mathas
I think my style is more just making cameos in everyone else’s scene.
Mojo Juju
Scones, savory, sweet I don’t mind
The Wooden Sky
Leadfinger is a very strange band, hard to define, but we are free.
Stew, Leadfinger
Anywhere there is good company, great conversation, and a glass of red.
Helen Perris
I just do my best to live a life full of the things I love. Rock’n’roll, photography, New York City – they are three things right there that I love a lot!
Paul Miles
The Astor Theatre on chapel st. Old cinema with copious amounts of atmosphere playing classic films (Chaplin, Gene Kelly, Kubrick, etc) and me with a honeycomb choc top spilt on my Tshirt because that’s just how I roll.
Jude Perl, Comedian
All the kids who weren’t cool at school and still aren’t. Those people who didn’t manage to become awesome artists and uber hip performers. The raggy dolls who never found a way to make their raggy doll-ness work for them.
Jonathon Duffy
Going to the river on sunny afternoons with the blow up dingys and resting your beers on lily pads.
The Frowning Clouds
My scene is a Punk-hardcore scene or an underground, minimal electronic scene, something grungy – where everyone is wearing black. That’s my vibe; don’t go out until 11 when all the other vampires come out and go home when the sun comes up at 7. Oh shit. Creatures of the night.
Greg Puciato, Killer Be Killed & Dillinger Escape Plan
Cool small bars with good food, good wine, good company
The Backsliders
I like to think that I belong to the head-strong Independent Music Scene – where we – musos and audience and everyone in between – all make gigs/tours, recordings, releases happen for ourselves and work our arses off to keep it going for the rest of our lives – all for the love of Music!
Florelie Escano
The TV show “Full House
World Wild
Melbourne. Nowhere else is as great as Melbourne.
Brat Farrar
I like to be out in the nature, to get away. Go to the woods. My dad lives in the woods. Maybe once or twice a year I don’t have phone reception there is no Wi-Fi
Fredrik Åkesson, Opeth
Aside from music and everything creative, I love open-mind people, unexpected humour, seeing the world and nature, riding my bicycle, playing billiards. I’m also a fan of coffee, whiskey and most things vintage.
Jessica Stuart Few
Experimental electronica, musical metacreation, multiplicitous media, hacking.
Ollie Brown
Our scene is this big gorgeous wide world we live in all its majestic splendour!
Kim Salmon, The Darling Downs
It’s Thonbury. It’s my dreaming. I’ve lived here 30 years and it’s evolved with me. The more I drink wine, the more wine bars appear in the neighbourhood. The more I eat, the more cafes appear in the neighbourhood. Fantastic.
Denise Scott, Comedian
It’s beards.
Nathaniel Beard, The Beards
World/folk. Acoustic and proud of it!
Ilana Cravitz, The London Klezmer Quartet
Yass KFC
Simon, Loon Lake
Staying home out of harms way.
Peter Milley, Cairo Club Orchestra
What’s my scene? well…
And another thing I’ve been wondering lately
Oh, baby,
Tell me where have you been?
Now the stage is set
Where’s my Juliet, baby?
Is it maybe
My Midsummer Night’s Dream?
What’s my scene?
Clowns
When I’m not working in the studio or doing shows I’m at home with my partner and our baby so I guess they are my scene.
Way of the Eagle
Sitting in the sun, in a nice chair, with a good book.
James Reyne
I am a simple man. My scene is simple. I like playing metal and spending time with my family.
Waclaw ”Vogg” Kieltyka, Decapitated
My scene is at the moment Big Wongs General Tsos Chicken as I get sauce on the keys typing to you :-)
Brian Mackey