Tell us about your new single/album/tour?

I’m joining forces with my uber talented sister Anushka to debut our new show Siblings. We’ve performed together since we were kids, so there’s a great comfort when we’re on stage. We like so much of the same music and are inspired by similar artists, so the working relationship flows really well. Anushka writes amazing songs, and we’ll be be doing a combination of her songs and mine, lots of new material. And there will be stories, we’ll be lifting the lid on a few family secrets. We’re working with Dave Evans, who plays with so many Melbourne groups, he’s a natural musician and one of the world’s most lovely people. He’ll be on accordion and piano, and I’ll play guitar, and both Anushka and I will sing, together and alone. The Butterfly Club is such an intimate venue, doing a run of six shows in a row, we’ll really feel at home in the space.

I’m really deep in writing at the moment, so I’m not listening to much other music. I have to say though, I played at Illawarra Folk Festival last weekend, and there was a wild late night party with about ten musicians playing crazy old Italian folk songs – one Sicilian guy started playing the jaw harp and it rocked my world, it sounded big and mean and made you wanna dance, he made me see the Jew’s harp in a whole new light!

Tell us a quick, on the road or studio, anecdote…

The next morning, after my gig and that wild night of dancing tohe Italian band, I was visiting an old friend, a long time member of my band the Black Sea Gentlemen, Guido. His 10 year old daughter had some friends around and one of them kept looking at me and smiling and then leaving the room. It was cute but I didn’t understand until her mum told me that they’d seen my show the night before and she REALLY loved it. The all ages element of folk festivals is awesome, I never get to play to so many kids and teenagers anywhere else. So, back to the story, the little girl was a bit overwhelmed by me being there in the room, drinking a cup of tea. She walked past the table, smiling at me, not looking where she was going, and walked straight into a big old billy cart and fell over, then got up and kept walking as if nothing has happened. It was gorgeous.

I just read Rosie Batty’s book about her life, and the death of her son Luke. She’s an inspiration, she’s been through hell and is still so committed to making positive change and bringing attention to men’s violence. We’re living in amazing times, the new women’s movement is going to make the world a better place for everyone, men included. I was raised as a feminist, and personally, I can’t wait to see the world that’s waiting for us when patriarchy finally falls apart – its about time!

Haha, so many! Well today, I’m going to say Sixteen Tons by Merle Travis. He wrote in the mid 40s, even though the most popular (and probably the best) versio nof the song was recorded by Tennessee Ernie Ford in the 50s. “Some people say a man is made out of mud, a poor man’s made out of muscle and blood, muscle and blood and skin and bone, a mind that’s weak and a back that’s strong”

A Formidable Marinade – I mix alot of different things into the pot. I’m not interested in a limited diet. Like food, music can go anywhere you want it to, if you have a confident hand with ingredients and the spices, it’ll always turn out well.

Siblings is the first step in a bigger show that I’m writing at the moment. I’m at a point where I really want to stretch myself as a storyteller and a songwriter. I’m writing an autobiographical theatre show that delves deep into family mythologies and explores my relationships with the women who’ve made me the man I am today. I’ve got an amazing creative team supporting me, and it’s giving me the courage to go to some really tender places, it’s scary at times, but its exciting too. It’s also great exploring how songs work in a theatre context, it can be much more open ended than at a gig where it is song/applause/song/applause. This show won’t hit the stage until next year at the earliest, it’s good allowing time for the story to expand and contract and to find it’s feet, it’s a journey.

These days, my scene is country – not the genre, the place – I live in an old converted church in a little country town called Majors Creek, between Canberra and the South coast of NSW. I spend so much time touring, which I love, but I also love coming back to the country quiet, the big skies, looking up at a million stars; being with Rose, my wife to be, and our dog Luna is my idea of a good time. 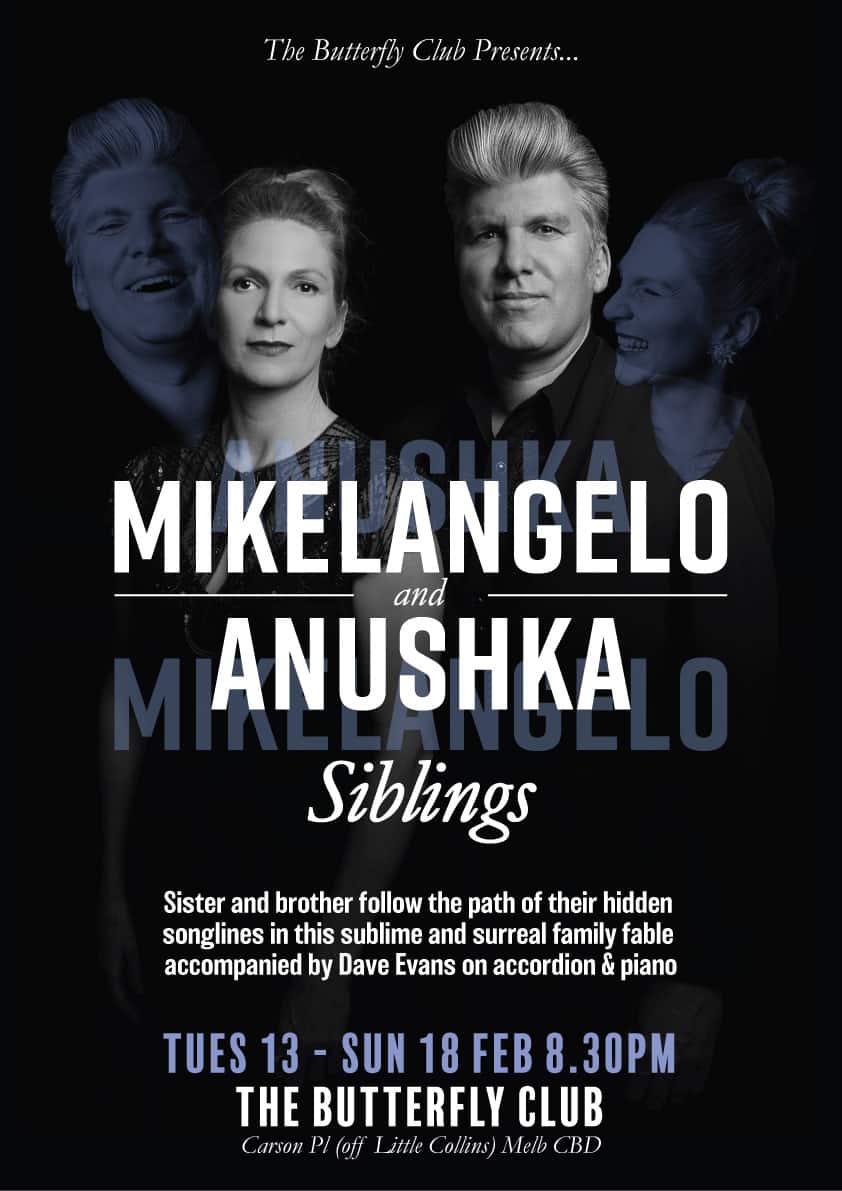 The two grew up with parents who encouraged creativity as a vital part of life. Alongside their elder brother Victor, they endlessly drew pictures, played music and made up stories and plays. As the siblings moved into their teenage years, they developed their own stage personas and a symbiotic performance style.

Mikelangelo and Anushka have collaborated in many ways over the years, from early public forays with Monty Python skits like ‘String’ and ‘Bookshop’; to touring in the 90s in Australia and the UK as part of absurdist group P. Harness, with their kids show for adults ‘How Things Work’. Anushka was a key player in the musical and theatrical development of Mikelangelo and the Black Sea Gentlemen
in the 2000s, performing as a part of live shows and recording her song ‘Figueres’ for the bands’ second album, Journey Through the Land of Shadows.

In Siblings, Mikelangelo and Anushka bring together a collection of original songs and stories filled with wonder, mystery, horror and joy, making a clandestine spirit map of their journeys to adulthood. Tapping into shared secrets and family mythologies, they weave humour, hope, love and loss into a potent show, accompanied by Dave Evans on accordion and piano.

Feature Scene: Rob Snarski – 36 Hours in the Life: From Belgrave to Bathurst and Back