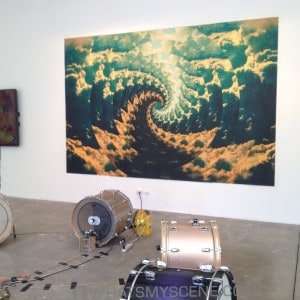 Sun, a stellar line up of artists, vodka cocktails, double bangers and art installations made up the heady mix to rouse the senses, as the Sugar Mountain Festival, at new digs in the VCA and its surrounds.

Bo Ningen, gesticulate wildly, while hitting those distortion pedals hard and deliver loud, pummeling riffs, with punters viewing their set from the shade of buildings along the right of the stage. Melbourne locals Twerps offer melodic, guitar pop, to soothe the throng on the Dodds Street Stage, while homegrown proponents of tribal dance rhythms No Zu featuring Sal P are sprawled across the entirety of the stage, inciting a mini dance party.

Improvised, disparate, guitar sounds and a staged projection forms the set of Kim Gordon and Bill Nace as Body/Head, which fails to meet expectations. 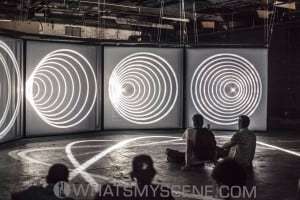 [pullquote]One attendee who’d consumed a bit too much acid when asked if he was alone, answered “We’re all a collective,” and that holistic experience was the vibe of the day.[/pullquote] Meanwhile French Artist Nonotak’s sound and light projection is an awe inspiring sight to behold in the warehouse, and later the artist reveals himself in The Theatre for a live show. 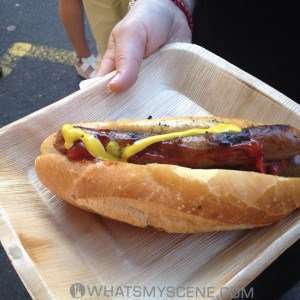 Dotted around the grounds are various galleries with art installations, and interspersed throughout is the food and drink on offer. Uncles’ pork meatball Banh Mi and sweet potato fries and Ike’s Rack Shack Double Banger Roll with copious side condiments hit the spot and are washed down with the excellent vodka, agrum, mint and lime cocktail a few times over. One attendee who’d consumed a bit too much acid when asked if he was alone, answered “We’re all a collective,” and that holistic experience was the vibe of the day. 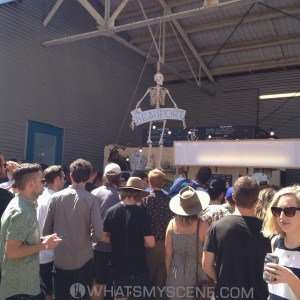 riel Pink and his seven band members, notably, drummer Don Bolles from LA punk legends The Germs put on the show of the day. Pink sported pigtails and a hot pink top true to his name while Bolles wore a more comfy green bikini taking full advantage of the sun. “Round and Round,” “Black Ballerina” and “Dazed Inn Daydreams” incited loud sing alongs, whilst Pink’s impassioned vocals, delivery and 70’s synth pop sound left a smile on everyone’s face.

Headliner NAS closes the show, drawing the largest crowd of the day. All are transfixed, with hands raised in the air, watching him perform Illmatic in its entirety, ending a memorable Summer Festival that offers a unique experience for its attendees, which is a credit to its organisers.

Check out Mary’s photos of the day.

Billed as the Festival of the Ecstatic, Supersense drew theatre, music and arts patrons to four different stages, in the Arts Centre Precinct. Curator and performer Sophia Brous collaborated with the Asian Performing Arts Program […]

SUGAR MOUNTAIN DISHING UP A NEXT LEVEL FOOD & BAR EXPERIENCE Melbourne’s most progressive music and art festival, Sugar Mountain, is elated to announce its curated food and bar offering for 2015. It’s an extension […]

Quirky cabaret bars that serve a mean G&T and boast a stellar cocktail list..which is why you’ll always find me returning to The Butterfly Club! I also love the buzz of a Fringe or Cabaret Festival, or a smart Opening Night. Any excuse for a dress up, really!
Amelia Ryan, Lady Liberty
I like to be out in the nature, to get away. Go to the woods. My dad lives in the woods. Maybe once or twice a year I don’t have phone reception there is no Wi-Fi
Fredrik Åkesson, Opeth
Any scene with Al Swearangen & Mr. Wu from the show Deadwood ;)
Mathas
It’s beards.
Nathaniel Beard, The Beards
My scene is driving fast cars and shooting guns.
Ace Frehley
Our gigs have an air of danger and sex. Beautiful women are free to express themselves and are as dangerous as hell. Everybody can have a good time ’cos there’s a lot of love in the room and we just can’t help but stomp out that primeval swamp boogie ooze.
Chris Russell’s Chicken Walk
I like to think that I belong to the head-strong Independent Music Scene – where we – musos and audience and everyone in between – all make gigs/tours, recordings, releases happen for ourselves and work our arses off to keep it going for the rest of our lives – all for the love of Music!
Florelie Escano
The car wash scene from Cool Hand Luke will do just fine thank you.
Old Gray Mule
Art is my scene. No labels, restrictions or judgement. I love art in all it’s varied glory.
The Last 5 Queers
I have no idea what my scene is; I have been listening to Dubstep and a bit of Drum N Bass. I found a lot of Hip Hop and RnB stuff is getting very interesting again it is pushing different sounds out. I’ve been really into cycling since the early ‘90s; racing mountain bikes and racing road bikes. So between cycling and music there is not much time left, a bit of sleep now and again.
Mike Edwards, Jesus Jones
Alice likes the Google. Sime likes taxidermy. It’s a pretty happening scene.
Sweet Jean
My family, my friends, my home.
Cory Putman, Norma Jean
Comedy, surreal show girls, burlesque and theatre
MC KREWD
Tunes, mates, and honesty. No dickhead policy!
Buddha In A Chocolate Box
Book clubs, philosophy and extreme black metal
Elsen Price
Deep 70s disco, wonky synths, shady lyrics, fairy lights and cheap wine.