The Carnival of Suburbia continues its successful run at the glorious suburban rock venue the Caravan Club, in Oakleigh with none other than a man hailing from Perth’s suburbs, Dave Warner. On a sunny Sunday afternoon, during Labour Day weekend, patrons relished their free snags out the back, trying to politely refuse the finger food on offer at the private party.

Seasoned songwriter Paul Madigan kicks off the set, with acoustic guitar in tow, his mellow vocals perfect for a lazy Sunday arvo. Madigan is amply accompanied by Jex Saarelaht on piano and refers to a notably absent Ross Hannaford throughout the set. Hannaford’s absence is a mystery to many, but Madigan’s good humour and laid back singing style, fills the gap. 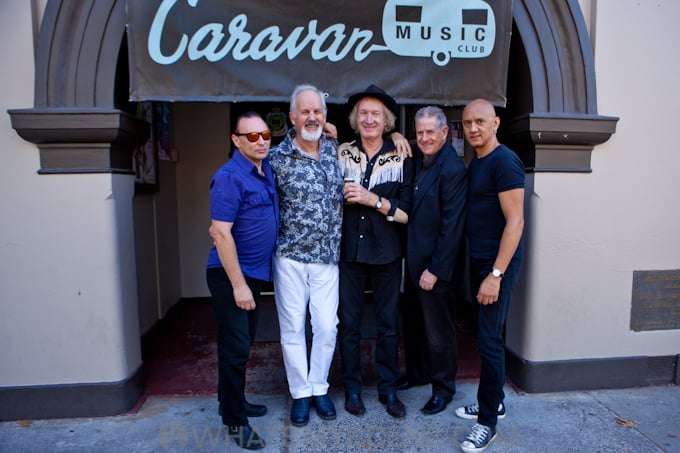 Dave Warner’s from the Suburbs features a star studded line up of musicians; The inimitable bassist Greg Macainsh, who many know as the driving force behind Skyhooks, penning most of their songs, guitarist Martin Cilia (Atlantics and Mental as Anything), guitarist Tony Durant, drummer Lloyd Gyi, and not forgetting the man himself, Dave Warner, musician, songwriter, author and scriptwriter and purportedly led Australia’s first Punk band Pus before the advent of Punk.

“UK Euchred” opens a tight set, later “African Summer” turns things up a notch; the chants and tribal rhythms stir the throng. Warner’s conversational, singing style melds perfectly with hard rock created by the seasoned musos on stage. “Half-Time at the Football” sees the crowd erupt in a chaotic sing a long and proves to be one of many highlights on the day. “Nothing to Lose” and his trademark hit “Suburban Boy” draw screams of appreciation from the audience, and the band end strongly with classic “Mug’s Game.”

Dave Warner’s from the Suburbs nostalgic musical foray rekindled fond memories from the 70’s and 80’s and entertained the suburbanites. (Review by Anna-Maria Megalogenis, Photos by Mandy Hall & Mary Boukouvalas)