Tell us about your new single Ride?

It’s a song that takes you on the journey of a band who is punching forward towards everything they’ve worked for. Basically the song is our message to the world saying “we’re here, like it, or leave”.

Parma. You find a parma at the pub, you find us at the pub. Bada bing, bada boom.

At the end of 2020 as we were coming out of lockdown, we played a show at Eddies bandroom as our comeback show. It was sold out and the show went off without a hitch. Only problem was that Charlie at that point was about 3 days into a bender by then, and was doing really cooked shit. We thought he wasn’t going to be able to get on stage but as soon as he stepped on everything clicked and it was almost like he’d never even had a drink. Crowd went off and I don’t think we’ve ever lost that much sweat any other time.

The roots of my musical influence have always based around Slash but as the years went on, my influences became more rounded.

Sweet Child O’ Mine, it’s the song that made me pick up the guitar when I was 10.

I’m part of the music scene as a whole. 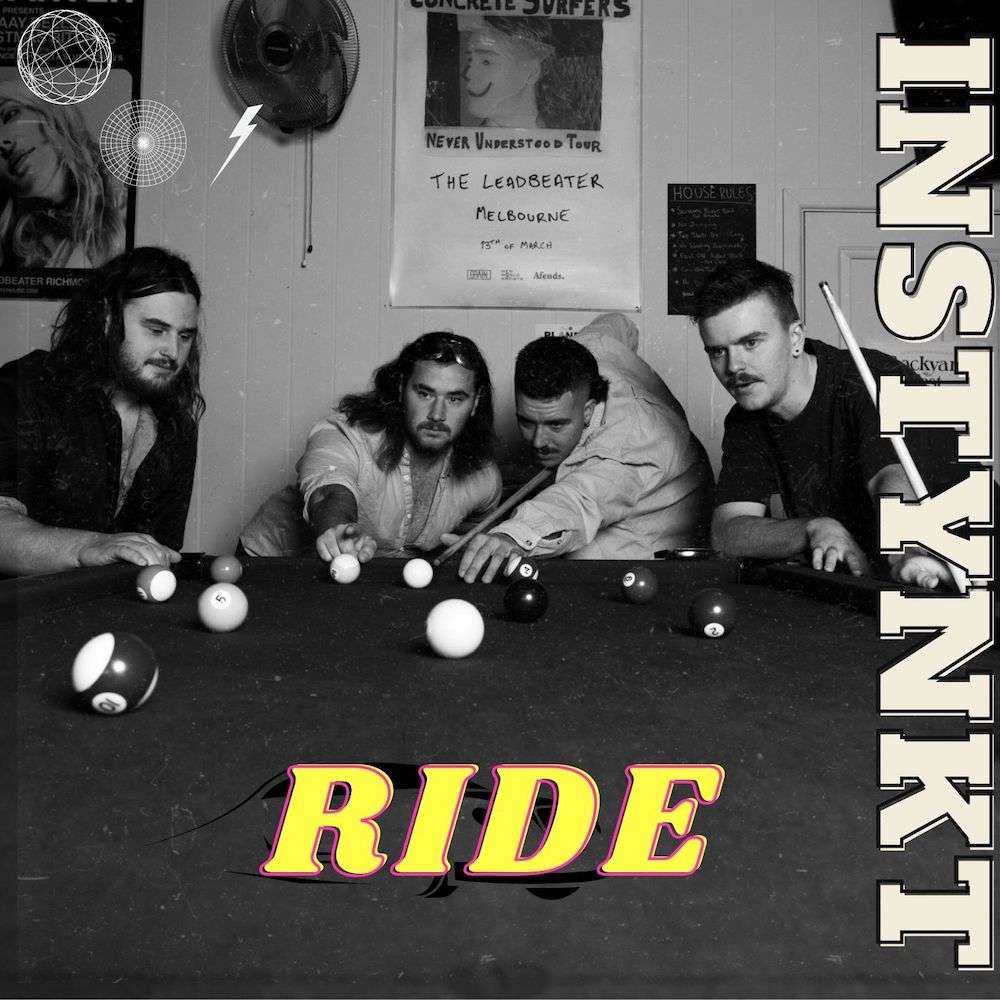 Classic rock gets a mighty modern makeover via the punchy new track RIDE from Melbourne youngsters INSTYNKT. An upbeat anthem for positive self-belief set against rock and roll served straight up, RIDE also comes belting in today with an accompanying music video, marking the band’s first ever official music video released into the wild. And they’ll celebrating with a gig tonight at Melbourne’s iconic home of rock, Cherry Bar on Friday August 26.

RIDE radiates pub rock swagger with fresh overtones, packed full of stomping beats, passionate riffs and pure pout via lead vocalist Charlie Lane. An uplifting and elementary rock and roll gem, complete with its singalong chorus and euphoric key change closing the track out in style, RIDE brings together INSTYNKT’s various eclectic personal influences. Weaving nods to the likes of Oasis, The Doors, INXS, Guns N Roses, Toto, Foo Fighters and KISS, RIDE also ultimately fuses the band’s own burgeoning sonic DNA into the mix alongside more classic inspiration, with the track serving both as a celebration of passion and a resounding declaration, as vocalist Charlie elaborates, “Ride is just a song saying “here we come, if you haven’t heard about us yet, you will”. It’s very self-inspired and is about believing in and backing yourself with no apologies, which is how it should be if you are passionate about your cause. With that being said, staying humble is important, but you can be both humble and believe in yourself simultaneously”.

Teaming up on RIDE with returning collaborator Lindsay Gravina, who has also previously worked with some sweltering Australian icons including Thirsty Merc, Magic Dirt and Nick Cave, INSTYNKT also today tick off a major first, with their first ever official music video debuting to the world accompanying the upbeat tune. Working with Andrei Satcau for the creation of RIDE’s visuals proved to be a match made in heaven for INSTYNKT, with the fellow Melbourne creative seamlessly aligning with the band’s ultimate creative vision for their debut music video endeavour. “We came across Andrei through another band that we played with called Among The Restless,” says Charlie of the video’s initial origins. “He’d done a video for them and it looked like the type of thing we were going for so I got in touch and it went from there. He’s a free spirit, and our ideas clicked pretty much exactly the same as each other – so the decision to go with him was easy. It’s our first proper music video that we’ve done so we wanted to have a pretty straightforward showcase that captures who we are. We had a video shot for another track early last year and it just didn’t work. Too much emphasis on a story line and not enough on what the band was about”.

Starting life as a high school band with guitarist Michael Uberti, Michael’s twin brother Shilo Uberti on bass, Mac Nicholson on drums and an entirely different lead singer, the present-day INSTYNKT lineup evolved by pure coincidence one night when Charlie, who was also playing in other bands at the time, stumbled across the band’s Instagram, lamenting that they already had a lead vocalist. But fortune favours the bold, and INSTYNKT’s eventual fate was sealed that very night via some fortuitously-timed DMs, as Charlie shares, “I don’t really know what drew me to them and was disheartened because they already had a singer but something just told me to reach out. Coincidentally, they were actually in need of a new singer! They invited me to audition – and the rest is history. The name was originally Black Temple before I joined, but we all felt that we needed a refreshed name. Shilo had a full on dream when he was younger that he was playing to a sold out crowd at Wembley under the name Animal Instinct. A lightbulb went on in my head and I suggested we simply name it Instinct. After not being completely satisfied, I changed the spelling to INSTYNKT and put it in all caps. It looked good on paper – so we went with it”.

RIDE is out NOW!

Gaz Coombes’ scene is a far cry from the chaos and disorder of Caught By The Fuzz. Formerly the frontman of Supergrass, subsequently an admired Mercury nominated solo artist, the unassuming Coombes states: “My scene […]

Tell us about your new single/ album/ tour? Very excited to be playing at the Melbourne Guitar Show. We’ve been recording new music with Mark Lizotte (Diesel) producing, so it’ll be a great chance to […]

Tegan Voltaire, The Voltaire Twins
Wherever there is music is where I feel most at home
Toby Robinson
That’s a hard one, although I do love anything electronic with an indie-pop feel!
Franki
Local bands at sticky carpet venues. Vinyl. Social networking. Keeping healthy in order to play full throttle live sets. Loud rehearsals. Good people with creative ideas. PRIMITIVE ROCK.
Jon S Williams of City of Cool
I think my style is more just making cameos in everyone else’s scene.
Mojo Juju