Fusing provocative lyrics with an electronic sound that had as much in common with Donna Summer as it did Kraftwerk, BERLIN created a sound that was both familiar, yet unique. Few bands emerging from the era of BERLIN have achieved as far-reaching and long-lasting an impact and, rarely, such a timeless array of musical grooves. The bands provocative debut single ‘Sex (I’m A…)’, ‘No More Words’, ‘Dancing in Berlin’ and ‘Like Flames’ were all chart hits in Australia with ‘Like Flames’ reaching #18. But it was the unforgettable, intimate, and strikingly beautiful Giorgio Moroder produced love song, ‘Take My Breath Away’that took the band to another level. The ballad’s defining role in the Tom Cruise film, Top Gun, helped solidify BERLIN’s everlasting place in American pop-culture. The song was a #1 international hit and received both the Golden Globe and Academy Award for “Best Original Song” in 1986.

The ground-breaking synth-electro-pop sounds and amazing vocals of Terri Nunn that continue to define BERLIN will be on show on their ‘’Best Of Tour’’ featuring all the anthems and classics from their entire career including ‘The Metro’, ‘Dancing in Berlin’, ‘Sex (I’m A)’, ‘No More Words’, ‘Like Flames’, ‘Masquerade’ and of course the Top Gun mega smash hit ‘Take My Breath Away’ 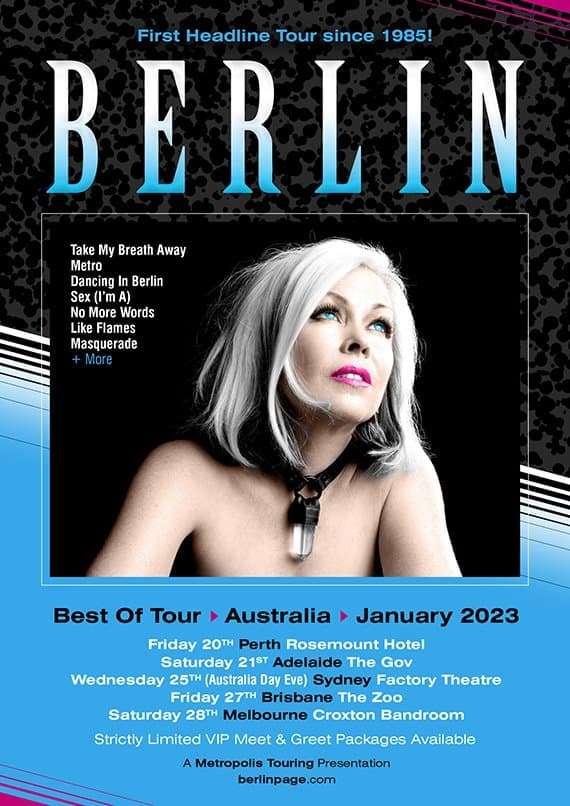 Tell us about your new EP release ? It’s called ’No Oxygen’. It started as an accident really. After a long period away from the live circuit, I found it hard to regroup. I needed […]

“Standing here watching this perfect jukebox band you are reminded by just how many great songs The Undertones have, every riff, every vocal line, every moment drips in pop perfection and the thrill of two […]

Going to the river on sunny afternoons with the blow up dingys and resting your beers on lily pads.
The Frowning Clouds
All the wandering. The bastards and the angels. The sound of the rain and the pains of the heart. The silence. All the houses and all the rooms. All the keys and phones.
Raised By Eagles

I’m in with the Out-Crowd
Dave Warner
“Malcolm Hill is a lifetime member of the Melbourne Music Mafia and part of the ratpack of post punk Melbourne artists who have been keepin’ it real across diverse art forms for thirty years.”
Malcolm Hill

I love being on a little boat near home in South West Victoria with a fishing line in the water, the Sun coming up or going down. I also love walking the streets of Melbourne or Manhattan or many of the beautiful towns and villages of Ireland or anywhere. My partner and my family are central to it all. I also love being in the midst of a great music session, anywhere, anytime, being transported into the soul of the Universe.
Shane Howard
My scene is Brunswick. I love it. It provides me with just about everything I need.
About Charlie Marshall

Tunes, mates, and honesty. No dickhead policy!
Buddha In A Chocolate Box
My scene is a Punk-hardcore scene or an underground, minimal electronic scene, something grungy – where everyone is wearing black. That’s my vibe; don’t go out until 11 when all the other vampires come out and go home when the sun comes up at 7. Oh shit. Creatures of the night.
Greg Puciato, Killer Be Killed & Dillinger Escape Plan

Well I’m still looking for my scene, and I think I might have found it. Between the pages of What’s My Scene Magazine.
Dave Faulkner, Hoodoo Gurus
The TV show “Full House
World Wild