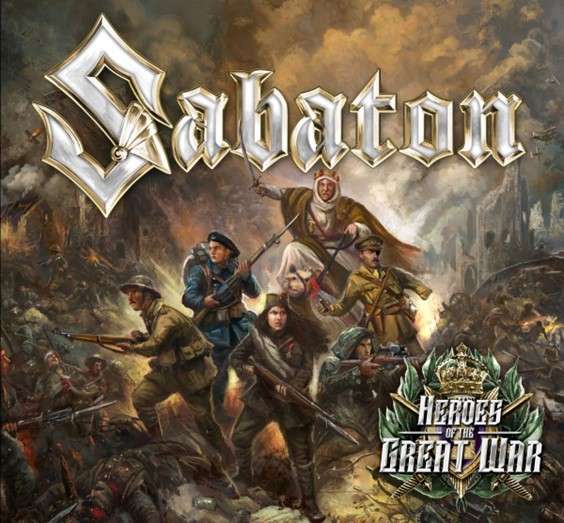 Following the successful launch of the Weapons Of The Modern Age EP on September 30, 2022, SABATON are excited to announce that Heroes Of The Great War, their second EP of the Echoes Of The Great War EP trilogy, is now available and features a never-heard-before track entitled ‘The First Soldier’.

The brand-new Heroes Of The Great War EP focuses on some of the boldest, most courageous heroes of World War I. For SABATON, these are people whose stories need to be told and whose narratives truly resonate with the band on a personal level.

Remarking on the concept of the new EP, Pär Sundstrom says: “Those involved in conflict and war push themselves beyond their limits, both physically and psychologically, and often achieve extraordinary things. They have no choice but to be brave and have no option but to do everything they can to protect what they are fighting for. Humans are programmed for survival, and some of these heroes’ tales that we write about are jaw dropping. This EP is our tribute to them and our way of ensuring that these stories are not forgotten and get the recognition they deserve.”

Referring to the new track, ‘The First Soldier’, Pär adds: “We are really excited to be releasing a new song with this EP and we are eager to see how people respond to the incredible story behind it. The song is about Albert Severin Roche, a World War I hero who believed he was destined for great things. And despite the doubts of his peers and the odds being stacked against him, he achieved the unbelievable.”

Albert Severin Roche was born in France and his father was a farmer. Roche signed up for the French Army at the age of 18. To his very core, he knew he was destined for great things, but standing only 1.58-metres tall, he wasn’t what the army was looking for, and he was rejected. Despite this, he eventually managed to enlist and was assigned to the 30th Battalion of Chasseurs. To begin with, Albert was not a model recruit and his fellow recruits and officers did not respect him. A fighter at heart with a fire for war burning inside him, he proved them all wrong. He was assigned to the 27th Battalion of Chasseurs Alpins (known by the Germans as “Blue Devil”) and became known as The First Soldier of France for his heroism and his successful missions. By the end of WW1, Albert had been wounded 9 times and had captured over 1,180 prisoners.

Joakim Broden says: “It’s amazing to hear these World War I stories about how individuals who are often doubted and looked down on end up becoming some of the most celebrated and respected heroes in military history. The story of “The First Soldier” is a lesson to never judge a book by its cover. People are capable of incredible things, and Albert Severin Roche’s determination and heroism are admirable. We hope people feel the same way we felt when we first heard his story.”

Stream it now: https://music.sabaton.net/HeroesOfTheGreatWarSABATON released an animated video for ‘The First Soldier’ in cooperation with French history influencer Nota Bene.

With each EP in the Echoes Of The Great War trilogy SABATON are releasing an exclusive digipak in limited numbers. They often sell out immediately, so if you want one for your collection, be quick!

Keep an eye out for the final EP of the Echoes Of The Great War trilogy.

Stories From The Western Front.

The third EP in the series, Stories From The Western Front, features songs about some of the most gripping tales from one of World War I’s main theatres of war. These stories, some of which are unimaginable in this day and age, depict the chaos, danger and instability soldiers faced on the daily, who were fighting in the name of their countries.

The three new EP releases will be available on all major digital music services.

About the Echoes Of The Great War EP trilogy The stories of World War I have always fascinated SABATON – two studio albums dedicated to this conflict are the proof. Originating from their all-consuming passion for history and heroism, the band has launched an EP trilogy entitled Echoes Of The Great War featuring new songs specifically about World War I, coupled with topically related catalogue music.

SABATON intend to present this music to their fans in a different way: With this WWI collection, you will be able to familiarise yourself with these incredible war stories, while simultaneously quenching your thirst for metal. 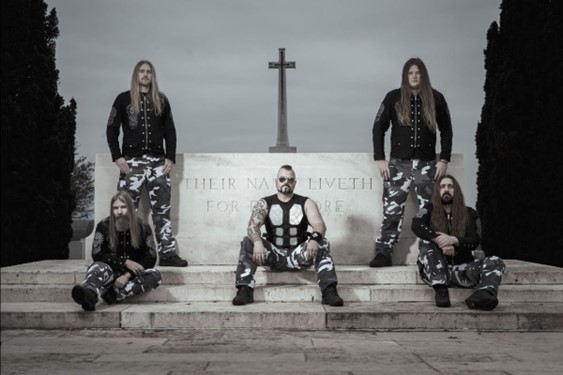 SABATON climbed the international charts with their album The War To End All Wars, securing #1 positions in Germany, Austria, Sweden, Poland, Hungary and Finland. Having achieved the top position for the second time in Germany, Sweden and Finland, the album peaked at #1 in Poland, Hungary and Austria for the first time in the band’s career. This and additional outstanding results in other territories have made The War To End All Wars SABATON’S most successful album so far.SABATON is a five-piece heavy metal band from Falun, Sweden. Since the band’s formation in 1999, SABATON has achieved quadruple Platinum sales and performed colossal concerts in over fifty countries.

Tell us about your new single Tripwire? If I’m being honest, I’m not the best at opening up, so Tripwire was a big step for me. Being able to express how I was feeling and […]

Tell us about your new single and upcoming tour ?  ‘I Was Better’ is the first single from my new EP that I recorded last year. It’s a breakup song that doesn’t take itself too seriously. I’m […]

Photos from the V Festival in 2008 which included Duran Duran, Cut Copy, The Smashing Pumpkins & Jesus and Mary Chain, among other bands. Photos by Mary Boukouvalas.

Tegan Voltaire, The Voltaire Twins
I love being on a little boat near home in South West Victoria with a fishing line in the water, the Sun coming up or going down. I also love walking the streets of Melbourne or Manhattan or many of the beautiful towns and villages of Ireland or anywhere. My partner and my family are central to it all. I also love being in the midst of a great music session, anywhere, anytime, being transported into the soul of the Universe.
Shane Howard
Melbourne. Nowhere else is as great as Melbourne.
Brat Farrar
Beer, riffs, good people, good food and new adventures, anywhere those things exist, that’s my scene!
Andy, Don Fernando
Anyone who welcomes a hairy, gold wearing, hot air blowing idiot to a dinner table is my scene.
Henry Wagons
It’s beards.
Nathaniel Beard, The Beards
Wherever there is music is where I feel most at home
Toby Robinson
I have no idea what my scene is; I have been listening to Dubstep and a bit of Drum N Bass. I found a lot of Hip Hop and RnB stuff is getting very interesting again it is pushing different sounds out. I’ve been really into cycling since the early ‘90s; racing mountain bikes and racing road bikes. So between cycling and music there is not much time left, a bit of sleep now and again.
Mike Edwards, Jesus Jones
All the kids who weren’t cool at school and still aren’t. Those people who didn’t manage to become awesome artists and uber hip performers. The raggy dolls who never found a way to make their raggy doll-ness work for them.
Jonathon Duffy
I will continue the continuum, singing my Songline.
Kutcha Edwards
Act III, Scene VI of King Lear. A tense and gripping scene wherein the ageing king informs his three daughters that they have all been accepted as contestants on Family Feud.
Ben Pobjie, comedian
What’s my scene? well…
And another thing I’ve been wondering lately
Oh, baby,
Tell me where have you been?
Now the stage is set
Where’s my Juliet, baby?
Is it maybe
My Midsummer Night’s Dream?
What’s my scene?
Clowns
I am a simple man. My scene is simple. I like playing metal and spending time with my family.
Waclaw ”Vogg” Kieltyka, Decapitated
Our scene is in the city of Bath, a small city with a very big musical identity, we play the British festivals and I am also in the ’choirs scene’. We are also in other bands for fun, music all the way, roll on summer!
Su Hart, Baka Beyond
Obviously to create music. My family. I love driving my Ferraris.
Yngwie Malmsteen