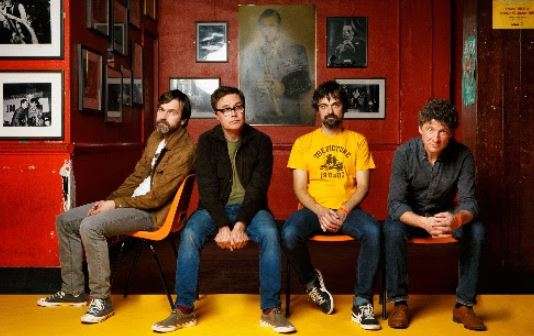 Britpop luminaries THE BLUETONES are returning to Australia and New Zealand in May 2020!

The band will be performing their breakthrough debut album Expecting To Fly IN FULL along with a set of their greatest hits!

Expecting To Fly was a sensation upon it’s release knocking Oasis’ What’s The Story (Morning Glory) off the #1 spot in the UK charts! Decade Mag included the album in their list of all-time greatest Britpop albums, with X Radio bestowing similar honours. The album set THE BLUETONES on a storied career having played thosuands of shows across 73 countries.

These long overdue dates will see the reunited foursome return for their first Australian headline tour in over 20 years whilst making their first trip to New Zealand.

These will be unforgettable shows not to be missed!

Teenage Fanclub’s Endless Arcade, already a hotly-anticipated release this year according to Pitchfork and The Guardian, arrives on its new release date of April 30, 2021. The band have just shared the next single from the album, the Norman Blake-penned ‘I’m More […]

John Garcia’s scene is a philosophical and spiritual one. The fuzz lord, founder and vocalist of Kyuss, Slo Burn, Unida and now Band of Gold states: “My scene is exactly what I’m looking at right now. […]

“When you combine the right songs with the right musicians and an audience that never forgot, it’s like coming home.” – Pete Paphides What started as an unforgettable live experience, and one of the band’s first performances […]

I love being on a little boat near home in South West Victoria with a fishing line in the water, the Sun coming up or going down. I also love walking the streets of Melbourne or Manhattan or many of the beautiful towns and villages of Ireland or anywhere. My partner and my family are central to it all. I also love being in the midst of a great music session, anywhere, anytime, being transported into the soul of the Universe.
Shane Howard
No set scene. We have played with a variety of bands from King Parrot to The Datsuns. Offer us a show and give us a try!
Los Hombres Del Diablo

When I’m not working in the studio or doing shows I’m at home with my partner and our baby so I guess they are my scene.
Way of the Eagle
I’m in with the Out-Crowd
Dave Warner
My scene is driving fast cars and shooting guns.
Ace Frehley
The beach. Tea with gin at your grandparents house. They have the best stories.
Betty & Oswald

Cool small bars with good food, good wine, good company
The Backsliders
What’s my scene? well…
And another thing I’ve been wondering lately
Oh, baby,
Tell me where have you been?
Now the stage is set
Where’s my Juliet, baby?
Is it maybe
My Midsummer Night’s Dream?
What’s my scene?
Clowns

The car wash scene from Cool Hand Luke will do just fine thank you.
Old Gray Mule
Currently its the Yarra River Trail I’m walking along. Generally my scene would be Melbourne. Nothing feels or compares to home.
Simon McConnell, The Delta Riggs
My scene is Brunswick. I love it. It provides me with just about everything I need.
About Charlie Marshall

Going to the river on sunny afternoons with the blow up dingys and resting your beers on lily pads.
The Frowning Clouds
Leadfinger is a very strange band, hard to define, but we are free.
Stew, Leadfinger
It’s a delirium, really, but I like to live like this.
Hugo Race